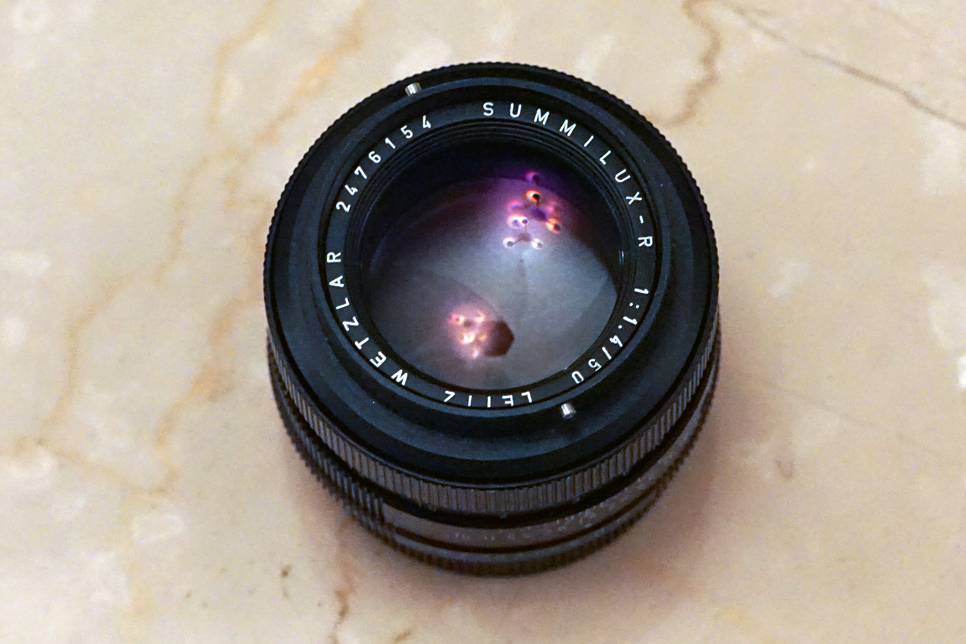 The Summilux-R 50mm 1.4 was produced for the now discontinued Leica R line of SLR cameras. Developed by Heinz Marquardt in 1967, the Summilux-R had a very long production run, ranging from 1970 to 2009.  In total over 35,000 copies of the Summilux 50 were manufactured for the Leica R cameras.

The Leica R mount can easily be adapted for many different cameras, making the 50 Summilux-R a favorite for photographers and videographers alike.

In my opinion, a good nifty-fifty should be an all-rounder. I want a lens that I can possibly leave on the camera at all times and that will perform in most situations. If I can only take along one lens, it should be THE lens I want to travel with. It has to be sharp, it has to have a decent bokeh, it has to be a good performer in low light and it has to be fun and easy to use. A good 50mm prime lens has to be versatile! Versatility is definitely what you get with the Summilux, it ticks all the boxes.

The 50mm Summilux is a really good 50mm prime lens. This lens is very sharp and the image quality you obtain is very good at all aperture settings. The Summilux is one of those lenses that will deliver a decent picture with almost any setting. Wide open you obtain a nice shallow backdrop and a lot of sharpness on your subject, especially in the center. The Summilux is not only sharp it also offers a lot of contrast, making for images that are clear and full of details. When you close the aperture, more and more details emerge. I would argue that the sharpness is almost on par with modern lenses, at least once you close the aperture a bit. The Summilux is both good for portraiture and landscape photography.

The Summilux-R is also very easy to use. Focusing and aperture (with clicks) controls are smooth and are where you would want them to be on a lens. I also really enjoyed the Summilux because the images are good “straight out of the camera”: no time consuming post processing required. This makes for fast shooting and quick results. Ideal for street photography.

The 50mm Summilux does not have any too disturbing vignetting. The bokeh is good and not distracting. You can create a nice, soft bokeh – yet your subject will always be the main attribute of the picture (with some lenses the bokeh can get overbearing). A nice side effect of this more subtle bokeh is that you obtain almost a 3D effect. Although the images are 2D you can kind of see distances.

A slight drawback is the lens shade on the early versions (which you have to clip on). Luckily the coating is very good on the Summilux and flares are kept to a minimum. Chromatic aberrations are also almost non-existent.

Normally the Summilux sells anywhere between 500 and 1200 US$. This makes it expensive compared to other, similar prime lenses. With a bit of luck you can get the early version for a couple of hundred bucks. Even if the price is steep, I would still give the Summilux a try if you are looking for a top notch lens.

The Summilux-R 50mm 1.4 is not the most affordable 50mm prime lens around. Although the lens sure is an outstanding performer I am not sure that the extra cost is really justified. At a fraction of the price, a 50mm 1.4 Pentax will also do the trick.

The solid, all metal construction of the Summilux-R is also rather heavy. You have to remember that this is not a tiny Leica-M lens but a SLR lens. It is among the heaviest 50mm prime lenses I have used. The lens still feels nicely balanced but you do notice the extra weight in your bag.

One disadvantage of the earlier models is the clip on lens hood. I really do not like them and end up not using them. They are cumbersome and a bit awkward to put on the lens. After Serial Number 2 806 978 the integrated lens hood became standard, a very useful upgrade in my opinion.

Although produced with different finishes, two different versions of the Summilux-R 50mm 1.4 exist. With a long production run ranging from 1970 to 2009, the 50 Summilux is nowadays widely available.

The first version was designed by Heinz Marquardt in 1967. The lens was produced between 1970 and 1998, after which the updated successor was launched. In total around 35,000 copies of the first version were made. Most of these were produced in the standard black finish, pictured below. Lenses were also produced in olive green (from 1977) for the Leica R3 Safari cameras as well as with a golden finish. From 1978 the Summilux 50 1.4 was manufactured with an integrated collapsible lens-hood.

Produced between 1998 and 2009, this version is much rarer. Fewer than 3000 were ever made. The lens is now heavier, also due to the additional lens elements (8 lenses in 7 groups). Additional information can be found here.