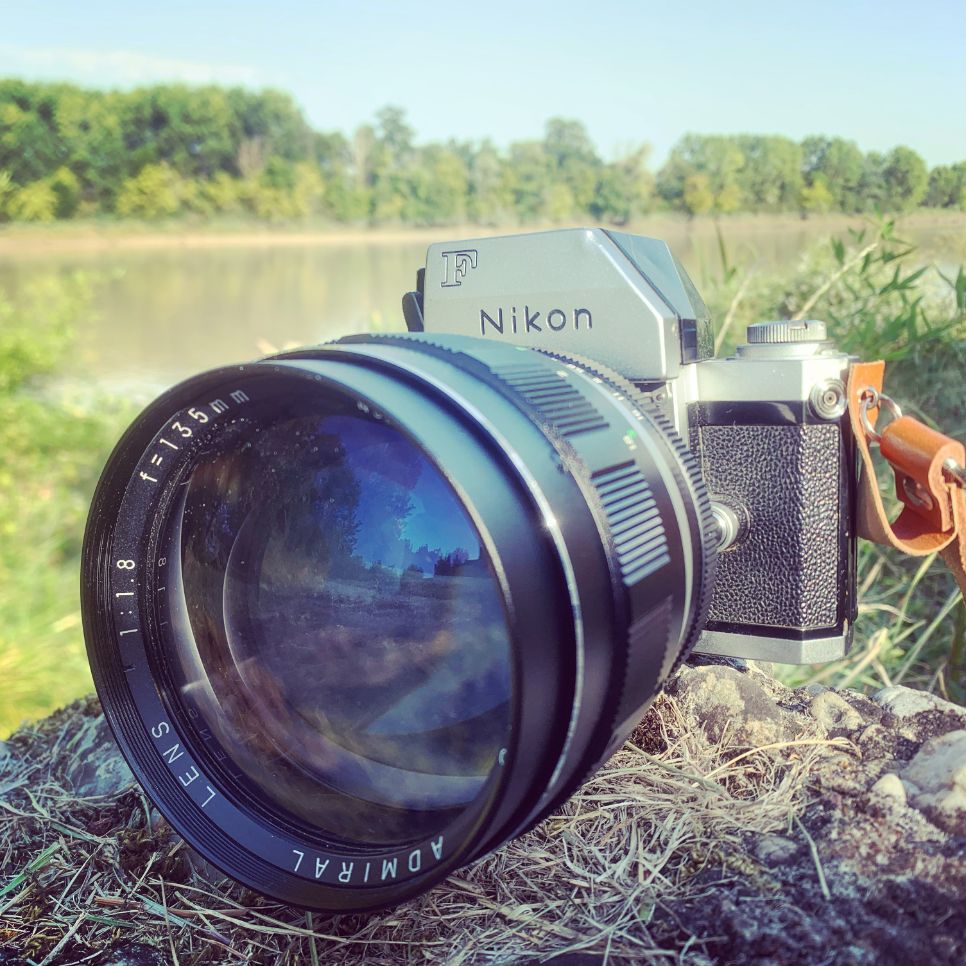 I rarely buy new gear anymore. Most prices have become too crazy to justify spending that much. Luckily I have amassed most of my vintage gear about a decade ago and hundreds of lenses and cameras are certainly more than one needs during a lifetime. Although GAS has been cured mostly, I do end up scrolling through websites to find the occasional oddity. A few months ago I stumbled upon a lens that I had never seen before: An Admiral 1.8 135mm. It looked fast, huge and weird enough to give it a try. The auction ended at 89 Euros and I had absolutely no idea what I just purchased. I did not know what mount it had, I had never heard of Admiral as a lens manufacturer before and there is about 0 information on the internet about it.

My lens has the original Nikon F mount. I did a bit of digging and apparently the 135mm 1.8 was sold under different brand names including Porst and Spiratone amongst others. Here is an add from Spiratone of the time, promoting this illustrious lens that uses “rare earths” and is supposed to be a must for available light photographers:

This really is a lens for certain, very specific situations. Due to the size and weight I do not think that people will simply casually carry it along when you go for a stroll and see what happens. No, this one is for people who know what they are doing and already have a concept in mind. I can see this happening for portraiture shots a lot.

Now let’s jump straight into it: how is it wide-open at f1.8? If you like soft, wide-open portraiture shots, the Spiratone / Admiral 135mm 1.8 is definitely worth considering. Personally I was expecting a bit more in terms of bokeh. No crazy swirls or anything fancy here. The Spiratone 135 1.8 stays rather sober in that regard but it does add a certain specific vintage look that I think a lot of people will like. Even on digital images turn out with a slight analogue, flat tone that you get with certain film. Granted: this is not everyone’s cup of tea but it will thrill some photographers.

Once stopped down the lens is actually rather sharp. Nothing groundbreaking I must admit, but I was surprised that it behaves like most 135mm lenses. At f4 or beyond you catch loads of details and crisp images. Problem is: why would you want to do that? I mean you can achieve these results with most 135mm lenses that weight less than half of the Spiratone. duh!

An aspect that really surprised me was the built quality. This thing is solid! Now remember my copy is an Admiral branded one – but I am sure the ones with other brand names will be on par. Apertures are with clicks. Focusing is super precise. The construction is super solid and in metal. No plastic nonsense. Overall the Admiral 135mm 1.8 feels rock solid, mature and confident.

I touched upon of the main reasons folks will buy tis lens: because it is fast. Yet wide-open it is also not very sharp at all. Images turn out a bit hazy. Due to the enormous front element there is also a fair bit flaring going on. Top it all off with a significant lack of contrast and you end up with a really experimental lens that some will absolutely adore but others will certainly loath. If you are on the artsy side, like playing around with effects and look for “imperfect images” – then the Admiral / Spiratone 135mm 1.8 will be a lens that you will have a lot of fun with. One thing I noticed is that the Admiral / Spiratone 135mm 1.8 is very sensitive to different lighting conditions and thus is not really a consistent performer. While a lot of lenses offer much more leeway, this lens is really hard to predict (but I guess this can change the more you use it). Outcomes are often drastically different although the setting is almost identical. Suddenly flaring or lack of contrast pops up simply because there was a fraction of a change in the available light.

One drawback is certainly the humongous size and weight of the lens. It’s over 1KG. It’s huge and very noticeable. Most cameras you will use this lens with (especially if adapted to lightweight digital camera bodies) will be completely outbalanced. It is not really fun carrying it around for a longer period of time. No, this lens is for very specific situations. You plan ahead and you use it. You won’t bring it along on a casual stroll.

Finally, this little puppy is rather rare to get. I stumbled upon in out of pure luck. I believe that the scarcity also means that it is pricey and I have seen a few copies being sold at around 600USD, which is pretty hefty in my opinion. I understand that f1.8 at 135mm sounds magical and very tempting but I would rather save a few hundred bucks and buy a “normal” 135mm (which you have plenty of) or be patient and wait until a bargain comes along.

As far as my research goes these lenses are identical, except that they have been sold using a different branding depending on geographical sales region. Spiratone seems to be more used in North America, Admiral in Europe etc.