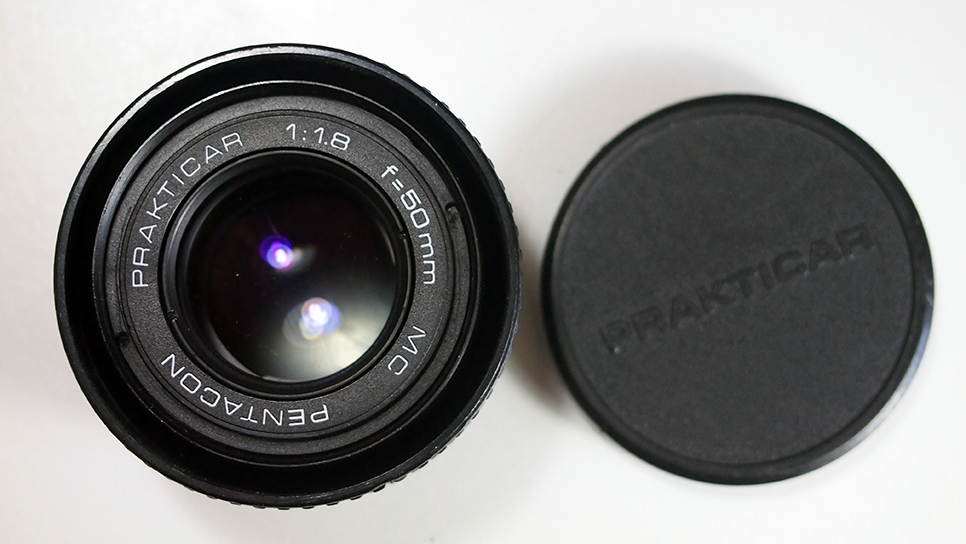 The Pentacon Prakticar 1.8 50mm was the prime lens for the ‘Praktica B’ system. The ‘Praktica B’ system was introduced in 1979 and was the last big push of the East German camera industry. Over one million Praktica B camera units were manufactured. Therefore, the Pentacon Prakticar 1.8 50mm MC is nowadays one of the most affordable lenses you can get. The design of the lens is based on the Meyer-Optik Orestor 50mm 1.8.

This is a review of the Pentacon Prakticar 50mm 1.8 lens, not to be confused with the Pentacon 50mm 1.8. The Praktica B system was very different from what Pentacon used to manufacture before. First of all it used a newly designed bayonet mount (the ‘B’ stands for bayonet) and secondly the materials used were much different from previous models. Pentacon wanted to reduce the cost and the weight of the camera. Other manufacturers were putting a lot of pressure on the company, and the drain of the cold war meant that expensive materials had to be done without in the production process. Hence the Praktica B cameras as well as the lenses feel much more plasticky. Gone are the days of a solid all metal construction. This is not necessarily a bad thing: there is less weight to carry around than during the times of the predecessor: the Meyer-Optik Orestor 50mm 1.8. This makes the Pentacon Prakticar 1.8 50mm a really nice travel companion and the lens actually feels nicely balanced on most camera bodies, especially if you use an adapter (which adds weight and space) on a digital body.

The Pentacon Prakticar 1.8 50mm MC was one of the most manufactured lenses prior to the collapse of the East German camera industry. It is not sought-after by collectors hence you will not have to pay a premium to own one. This makes the Pentacon Prakticar 1.8 50mm one of the least expensive 50mm prime lenses available. You can snatch up a mint copy for less than $40, making it a real bargain.

In terms of optical performance the lens is decent without ever being overwhelming. The center of the image is rather sharp, especially when stopped down. Colours are nice and rich. The contrast is surprisingly abundant.

The bokeh is ok. Nothing eye-popping or swirling happening but it will do its’ job alright. For a lens in this price range the Pentacon Prakticar 1.8 50 does rather well, also in terms of distortion (then again it is a 50mm lens so it should be able to deliver a rounded off package).

The aperture settings are with clicks. The focusing is rather smooth and precise. Once you get used to the light weight and plastic feel of the lens, the Pentacon Prakticar 1.8 50 is actually a very easy lens to use. As it is so affordable you also do not have to worry about giving it a knock or a scratch. For me this is a workhorse lens that you can use for various situations.

I think that a lot of people would enjoy using the Pentacon Prakticar 1.8 50mm, especially as a first entry into the vintage lens world. If you enjoy taking a bit more experimental shots with flares and interesting effects this lens si for you. It almost makes it onto the Top 5 affordable vintage 50mm lens list, if it was not for its’ inconsistencies and flaws.

You cannot really be too critical with a lens in this price range. Overall, the package that this lens offers is very good value for money. Purchasing it will not break your bank and using it is fun and easy. Nonetheless there are certain downsides to using the Pentacon Prakticar 1.8 50mm.

First of all the Pentacon Prakticar 1.8 50mm is not a consistent performer. One shot might look fine and as as soon as one parameter is changed slightly (you move slightly, the light changes a bit etc) the results are completely different. I think this is due to the coating of the lens (but I might be wrong). Although coated, the lens tends to flare heavily. Now flaring is certainly normal on most lenses to a certain degree but with the Pentacon Prakticar 1.8 50mm we are talking big multicolored mammoth flares. This is totally fine if you know what you are doing and if this is the look you are after. For experimental and artsy shots this is great! But for beginners this might mean that they are in for some psychedelic surprises.

Next up is the corner sharpness. This for me is the biggest issue: the sharpness difference between the corners and the center of the image. In the center of the image the Pentacon Prakticar 1.8 50mm performs rather well. There are a lot of details and the subject looks full of life. But in the corners the images turn out rather smudgy. Now falloff in the corners is normal for a vintage lens but in my opinion the images of the Pentacon Prakticar 1.8 50mm do not look balanced. This makes for a nervous looking image that puts me off. I know, this is totally subjective but it does distract me. I would rather use a more evenly balanced lens like its’ predecessor the Oreston 50 or a Pentacon 50.