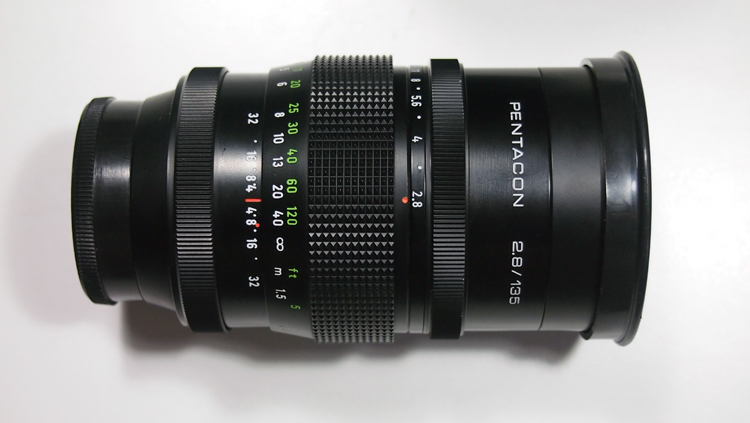 The Pentacon 135 2.8 is a very compact telephoto lens which offers good image quality at a very reasonable price. It was the standard telephoto lens from Pentacon and was manufactured extensively in east Germany by Pentacon. Two very distinct versions of this lens exist. Bookehlovers will love its’ creamy, smooth bookeh. At its usual selling price this lens is a bargain.

Some Pentacon 135 lenses are branded “electric” or “auto”. Coated lenses are marked “MC” or “multi coating”. The markings can have different colours (I have ssen white, green, yellow, red and orange).

The early version is based on the Meyer-Optik Görlitz 135 2.8 Orestor. This version is often referred to as the “king of bookeh”. With 15 blades, the diaphragm can close to f/32. This helps the bookeh and the overall performance. The minimum focusing distance of 150cm is 20cm shorter than the that of the later model.

The first generation also feels more solid and balanced. Compared to the later model the focus ring is wider and the aperture is set further up the lens. The first generation is my opinion actually better than the second version. Early models are rarer and hence are more expensive.

Later models are very different from earlier versions. They have 6 blades and an integrated lens shade that you can twist out out of the lens body. Ergonomically it handles a bit like a 50mm Pentacon with a giant lens hood attached to it. It feels a bit cheapish a times. The advantage was that you now had the AUTO setting (which does not make a difference when you use it on a modern camera). The diaphragm “only” closes to f22 and the minimum focusing distance is 170cm.

If the Pentacon auto 135mm f2.8 lens was branded Carl Zeiss, it would not be underestimated and underpriced as it is today.

I have always been positively surprised when I used this lens. The Pentacon auto 135mm f2.8 lens is a undervalued telephoto lens that was build by Pentacon in the GDR. It’s a solid all metal construction with an integrated lens hood (which can come in quiet handy). It performs superbly for a lens in its price range. The Pentacon auto 135mm f2.8 lens can be soft when shot open at f2.8 but performs much better when stopped down. The bookeh is is amazing for a lens in that price range.