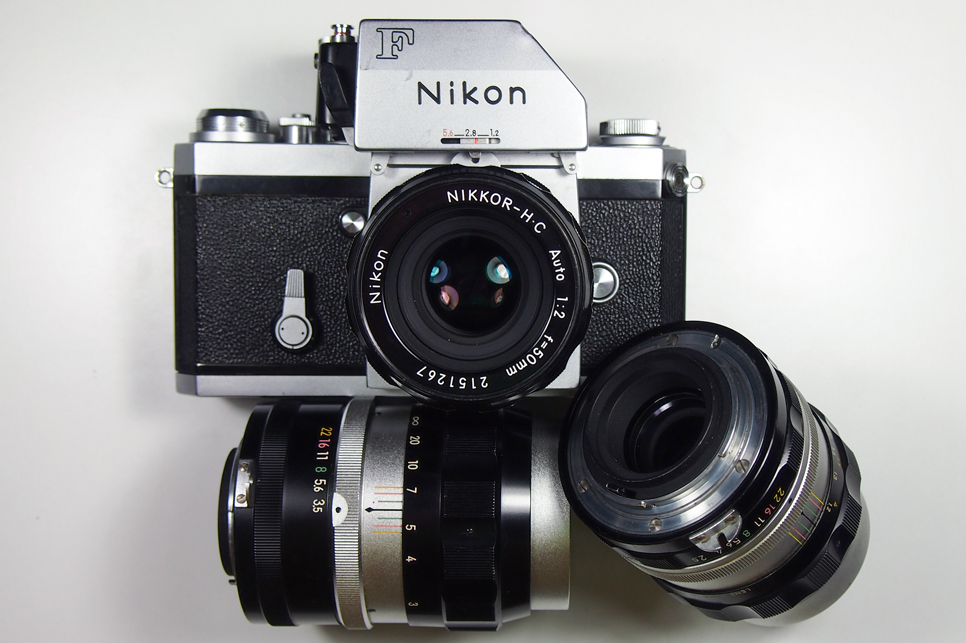 The Nikon 50 1:2 was the standard 50mm prime lens of Nikon SLR cameras. It is a 6 element lens design that was introduced in 1964 and was produced until 1979. It is the successor of the Nikkor-S 50mm 1:2 lens which had 7 elements and is not being reviewed here.

Throughout the 15 year production span the lens design stayed unchanged but multi coating technology was added in 1972 and the branding of the lens changed throughout the years.

The Nikon 50mm 1:2 is a very good lens. In terms of value for money it is pretty unbeatable. Although prices have been increasing slightly in recent times (as did most other vintage camera equipment) if you are lucky you can get the 50mm 1:2 for a bit over 50$. At this price the lens offers a very well rounded package.

First of all the handling feels very nice. When the ergonomics mostly have not been changed for 15 years you do realize that the engineers got it right the first time around. Everything is at the right place. The lens is very easy to use. The focusing ring is a real joy: it’s one of the smoothest focuses I have used. It feels like a hot knife going through butter. It is such a nice experience to focus this lens and I believe that many will appreciate this – this is especially true if you use it for videography.

I also really like the fact that the lens is totally understated – it does not look intrusive at all. It’s black, it’s small, it’s simple, it does not scream for attention. If stealth mode is your thing, this is the lens for you.

Let’s move on to the optical quality: yes, the Nikon 50 1:2 delivers! I really like the results. The image quality is great. The colors are cracking. The corner to corner sharpness is very good. There is no vignetting.  Many Nikonians say this is one of the sharpest lenses from  Nikon, and I can see why. The results are top notch and do not disappoint.

The lens also performs very well across different lighting conditions. In the midday sun, in the shade or during the night – results are mostly good.

Bokeh – which is a very subjective topic – is also good, at least for me. No it’s not the twirling extravaganza of a Primoplan or Biotar but it still looks good and creates a nice backdrop to your subject.

All in all this is a very good 50mm prime lens. It is solid across the board, doesn’t really have any major flaws and offers superb value for money.

I don’t think the 50mm 1:2 has any major unforgivable flaws. “But it’s slow, it’s only a 2.0 lens!” some might scream. Ok, I give you that – it is not the fastest 50mm prime lens around. As everything in photography there is always a trade-off. You want a faster lens? That’s going to mean more weight, more expensive and probably a loss in image quality. And honestly, when do you really need a 1.2 lens? And if you need one: Nikon has a 50mm 1.2 in its arsenal ready for you.

I think the Nikon 50 1:2 is a very well balanced product. It really offers what most people want. It’s sharp enough, it’s fast enough, it’s focusing is great – it’s a great all rounder. If you want to find the hair in the soup this is it: the lens is so well rounded of that it lacks character. The beauty of vintage lenses is that they bring their own look – they might not always be perfect but they are adding a unique characteristic to the picture. The Nikon 50mm 1:2 feels almost too polished. Still: it’s a great lens – give it a try!

The Nikon 50mm 1:2 was produced during 15 years and millions of lenses were manufactured. Although the 50mm lens underwent some face lifts and is branded under different denominations, its’ lens formula stayed unchanged. The only major difference is that later lenses have a shorter minimum focusing distance and a multi-coating surface.

The first version was produced from 1964 until 1972. The serial numbers range from 600001 to 2127006. These lenses have a silver filter mount (unlike later lenses, which have a black filter mount). AUTO stands for the automatic diaphragm, which means the diaphragm opens and closes automatically as you click the shutter. The H stands for Hexa (6) – a reference to the 6 lens elements.

There are actually two slightly different versions of this lens type. Lenses produced until 1967 (up to serial number 704257) are slightly smaller and 5 grams lighter.

In 1972 the 50mm 1:2 Nikon lens obtained a multi coated layer – hence the C in the branding. From now on the lenses also have a black filter mount. The NIKKOR-H·C Auto 1:2 f=50mm were produced from winter 1972 until 1974. Serial numbers range between 2140201 and 2329000. Besides the coating and the filter mount color they are almost identical to their predecessor.

After November 1974 lenses are simply branded Nikkor 50mm 1:2. Their serial numbers range from 3100001 to 3813172  when the production was discontinued in 1979. These lenses are slightly longer and heavier than their predecessor but they offer a shorter minimum focusing distance.