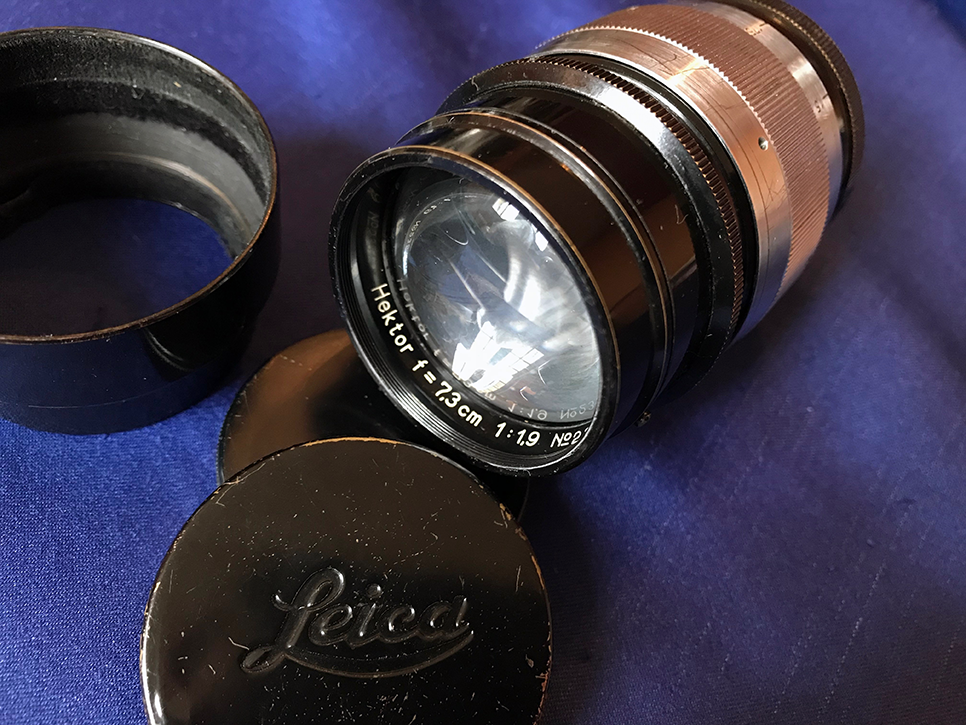 Introduced in 1932 for the Leica screwmount rangefinder cameras, the Hektor 7.3cm 1.9 was one of the first fast portraiture lenses with M39 mount. In the 1930ies, the Hektor 7.3cm lens was popular among news, portrait and magazine photographers due to it’s available light capabilities. Due the the high price the lens commended and the niche market it operated in, production numbers were rather low. Nowadays the Leitz Hektor 7.3cm 1.9 is rather rare to find and is highly collectible among photographica aficionados.

The Leitz Hektor 7.3cm 1.9 is, already on paper, a very intriguing lens. 7.3cm (or 73mm) is a rather unusual focal length, then add a maximum aperture of f1.9 to the mix and you obtain the recipe of a lens I really want to check out. I do have a penchant towards old, quirky pre-war screwmount lenses (mea culpa) so the Hektor 7.3cm was always on my radar. Unfortunately this lens was also always out of my price range. With only about 7 000 copies made (who knows how many have survived the war, cold-war, humid storage and fungus attacks) the lens is on the bucket list of most Leica collectors. This means there is only one direction for the price of the Leitz Hektor 7.3cm 1.9: it is expensive and it keep getting more expensive. For a decent copy you will easily pay over US$ 1 000. There always comes a time when you need to draw the line and I was never prepared to splash this kind of cash to experiment with a lens, however desirable it might be. So the Hektor 7.3cm 1.9 as well as its’ cousin the Leitz Thambar 90mm 2.2 were always far fetched dreams for years.

The seller in France had not properly described the lens. From the pictures I could make out it was a Hektor 7.3 cm with both caps and lens shade. Of course it could have had fungus, scratches, stuck aperture blades or a myriad of other problems. But having taken gambles before (and normally with a positive outcome) I just followed my gut feeling and went for it. I was a bit anxious after the purchase. It was a bit too good to be true.

The parcel arrived neatly packaged. The lens was in better condition than expected. No scratches, everything worked, smooth focusing, beautiful aperture. Even the original velvet was still firmly placed within the lens shade. I felt like I made the bargain of the century – these are the reasons I collect vintage photographica. It’s the hunt. It’s using your knowledge to find something special. Everybody with deep pockets can buy expensive stuff but where is the satisfaction? But I am going off topic here, my apologies.

Back to the lens and the first impressions of the Hektor 7.3cm beauty: this is one sexy piece of glass my friends. A beautiful classic black finish paired with a nicely riffled chrome aperture ring. The hand carved old Leica style fonts. The whole lens just oozes old Leica charm. Built quality is really amazing. The Hektor 7.3 cm 1.9 lens is really refined and well made. I like the fact that you can reverse the lens shade when you do not use it to put it on top of the lens, while still being able to add the lens shade. The lens shade does not use a screwmount, clamps or anything ‘barbaric’ of this sorts: no, the velvet inside the lens shade is just thick enough to create enough pressure for it to stay on the lens, even after 80 years! The lens is uncoated and I assume rather prone to scratches (no folks I have not tried it). At about 500 grams the Hektor 7.3cm feels solid but not overly cumbersome. Yes, this is on neat and pretty package.

Enough drooling about the exterior, who cares: how does it shoot? Well, in short it is a bit of a jekyll and hide situation. I was expected to be beamed to the land of ultra-fast bokehlicious bonanza. Some crazy spinning backgrounds that make your ears pop, combined with dreamlike softness straight out of a Hunter S. Thompson LSD trip. You know, something you would get out of a Trioplan or a Helios on steroids. This is a 90 year old f1.9 lens, surely it is driving the wrong on the Autobahn, Achtung!

But no, Mr Hektor is rather tame. When you shoot wide open, instead of bokeh swirliness you get softness. So much so that it is actually pretty difficult the get the focusing spot on. There is even a lack of contrast on most images. Now remember: this lens is made for low light situations: and that is were it performs the best. The Hektor 7.3cm was meant to be shot with B&W in dimly lit situations, for example portraits on a theater stage. It is in the dimly lit scenarios, in the shadow if you will that the lens performs best. And, I must admit, a few times the amount of details did surprise me.

The center sharpness is rather decent once you stop the lens down to about 3.5 upwards. Even in the corners the image quality is not too bad. There is not much vignetting and falloff. The focusing throw is very long, as is the case with most lenses of the same period. All-in-all I found it to be enjoyable to shoot with the lens but there are plenty of more interesting and better value-for-money lenses around.

Still I would like to pull my hat to the engineers at Leitz who made this lens. When you consider the technology they had at the time (no coatings, no exotic fancy glasses, no floating elements, no computer aided calculations etc) it is really remarkable that a lens that fast is actually that useable and renders this good results. I guess this, and the small amount produced, justifies to a certain degree the collectability of the lens. But from a shooter point of view (and this is what we are and should be about) this lens won’t make it into my camera bag that often.

First things first: the price. Normally you will easily have to pay anywhere between US$1 000 and 2 000 for the Hektor 7.3cm. Some mint copies are even sold at above US$3 000. As previously mentioned this is due to the collectability and scarcity of the lens. If you find a cheap copy on a flea market on a rainy Sunday afternoon: go for it! This should be a good investment is the price is right and I suspect the lens will increase in price for years to come if you take good care of it. Would I purchase it to take pictures with? No. There are cheaper, more fun alternatives that will not cause a heart attack every time you think you might have scratched it.

I found the image quality to be somewhat too unpredictable. Yes, this is certainly due to the lack of lens coating but I suspect it is also due to the speed of the lens. You see, the camera nerds of the 1930ies were exactly the same animals as the ones’ from today: I suspect the fast f1.9 aperture was also, to a certain degree, a bit of a marketing gimmick. Leitz knew that faster lenses are normally not better. They pulled the plug on the Hektor 50mm 2.5 in favour of the much slower Elmar 50mm 3.5. Yes I think they wanted to show that they could get below the magical f2 number (just like Canon and Leica with their 0.95 fifties a few decades later). And although they kind of pulled it off with the Hektor 7.3cm, offering a decent well balanced package, the lens only really feels comfortable at f3.5 and above.

Most Hektor 7.3cm lenses were manufactured between 1931 and 1941. A few copies were also manufactured during WWII up until 1946. Lenses have a black finish. There are two version available:

The first version has the Leica code HEKON. This lens is recognizable due to the narrow silver focusing ring. The HEKON version has a rotating focusing mount. This version could be used with the lenticular filters of the Agfa film process. The Leitz production of the HEKON ceased in 1934. Very early version of the lens are uncoupled.

If you have pictures of a HEKON, please do share them.

The HEGRA version was introduced in 1934. These lenses have a wider silver focusing ring. The HEGRA has a parallel, non-rotating mount. As with the predecessor, most lenses have a black finish black but a few copies in chrome finish also exist.