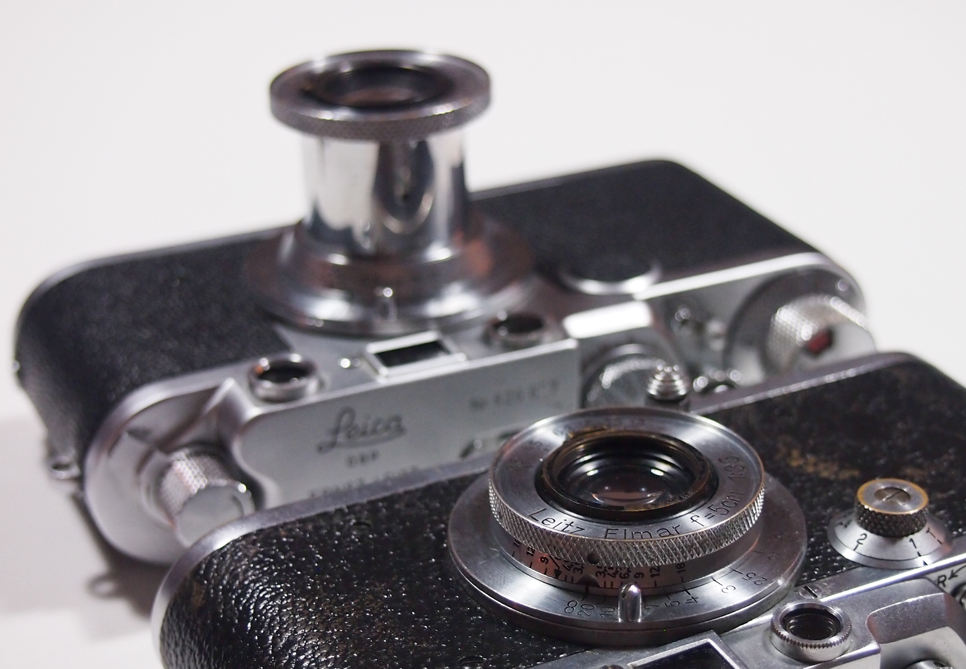 The Leitz Elmar 50mm (5cm) 3.5 is the Leica screwmount lens par excellence! An incredible amount of iconic images were taken with this lens.The Elmar holds a special place in the history of Leica cameras. It was produced about 360 000 times. A third of Leica cameras ever produced left the factory with such as lens. It was the standard prime lens of its’ generation. The Elmar 50mm (5cm) f3.5 lens directly derived from the 5 element Anastigmat and Elmax lens models computed by Max Berek in the 1920ies.

This is the least expensive Leica lens on the market and I recommend it to anyone who wants to experience are real vintage Leica lens. It might not set you back that much financially but in terms of photography it really gets back to basics with the Elmar. Even compared to later screwmont lens models the ergonomics are very basic. The aperture is set in the inner ring close to the front glass element by sliding a rudimentary metal ring. A beautiful feature is the possibility to collapse the lens. Making the lens disappear in the Leica camera was very clever and certainly a reason for the success of the lens.

Like most M39 Leica lenses, the Leitz Elmar 50mm f3.5 lens is extremely compact and lightweight. It really weighs only a fraction of any modern lens.

On top of that the Elmar lens can be collasped in order to fit inside the camera body when you are not shooting (note: this is not going to work on modern cameras as the back of the lens will hit your sensor / mirror). The result is a extremely compact, non-intrusive camera-lens combination. Street photographers will love (and always have loved) the 5omm Elmar lens. The 50mm Elmar lens can also be used for portrature and general purpose photography. It really is a great travelling companion!

You can also use it on digital cameras using an adapter. Combine this beautiful vintage lens with a screwmount Leica or a digital micro 4/3 camera and you have a superb shooter that fits into any pocket (although, on a camera with a cropped sensor, I would personally rather use a wider lens such as the 35mm Elmar).

From an image quality point of view, the Elmar 5omm lens is outstanding even by todays standard. While using the Leitz Elmar 5omm f3.5 lens both with analog and digital cameras, I was amazed that such a small lens can produce such amazing image quality. Image sharpness, colour rendition and the bookeh are great.

The 50mm Elmar lens is a bit flare prone. You might want to consider investing into a sunshade. Another drawback is that the Elmar is not the quickest lens. f3.5 screams for outdoor photography. But hey, its a classic that still offers sharper images and better bookeh than most modern kit lenses.

Obviously, another point to consider is the price of the lens. As all other Leica gear, the Leitz Elmar 50mm f3.5 lens is expensive, although it is the most affordable of all the Leica screwmount lenses. Still, you can find cheaper alternatives out there, including the russian copies that also use M39 Leica screwmounts.

The following images were taken with a MFT camera using a Novoflex adapter.

The Leitz 50mm (5cm) f3.5 Elmar lens is available both with a nickel and chrome finish. Early models are marked 50mm (and not 5cm). The latest versions (after #905 000) have a red depth-of-field scale and are hence called “red-scale” Elmar.