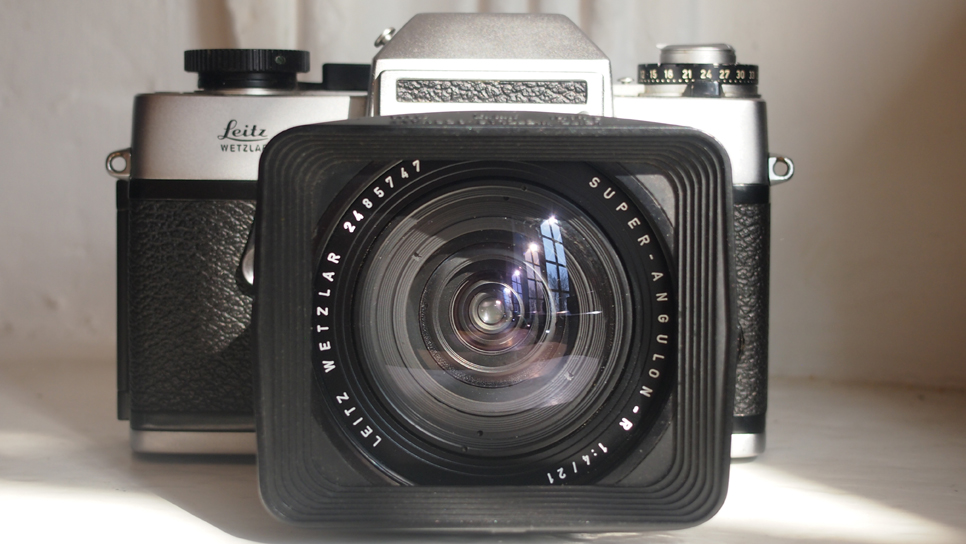 The Leica Super-Angulon-R 21mm f/4 is a super wide angle lens manufactured for the Leica R mount range of cameras. (there is also a version for the Leica M rangefinder cameras, but this lens differs a lot from the Leica-R version and hence is not covered here).

The Leica Super Angulon-R 21mm f/4 was not manufactured by Leitz / Leica but by the very reputable Schneider-Kreuznach company. Production started in the early seventies and was discontinued in 1992. In total a bit over 10 000 lenses were manufactured.

This Super-Angulon version is known for very good center sharpness, softness in the corners and is a bit prone to flaring. With a used price tag of more than $500, there are alternatives in it’s price range that should be considered.

I was very excited about the Super-Angulon because I love wide angle lenses. So this beautiful lens was allowed to join me during my last trip to Kerala, India.

The Super-Angulon is a proper lens. It’s made out of metal, there barely is any plastic. Therefore it is pretty heavy. Ergonomically the lens offers what you expect: smooth focusing, aperture settings with clicks, everything feels proper, solid and easy to use. One thing you realize right away is the huge front lens element.

So off we go to take some pictures.

Then you have the colors and the contrast. The Super-Angulon does exceptionally well here.

The colours are cracking. The contrast is very good and manages to captures a wide range of tonalities. This makes the Super-Angulon very versatile. It allows you to use it for various different light settings and for different techniques. You will not spend much time adjusting levels in post production. Most pictures look very good straight out of the camera.

Next up, and that is another reason I love wide angle lenses, is the minimum focusing distance. With the Super-Angulon you can get very, very (almost too) close to the subject. 20cm is really, really close. At this distance the large, bulky lens is blocking your view on the shot (especially when you use the big lens shade) and more than once I had the impression that I was about to hit the front element on my subject while looking through the viewfinder.

The Super-Angulon is not without flaws.

First of all, as mentioned before, there is the giant front element which is very exposed. Now this causes a few problems.

Firstly, although the lens is coated, you will obtain lens flares very quickly. With a lot of lenses you can get away with having light sources on the side. The Super Angulon on the other hand is not a fan of that and is much less forgiving. So when you are composing your image you will have to pay attention to where the hard light comes from and how it will break inside the lens. Hence you will need a lens shade most of the time. Normally I do not use lens shades that much. I think they are cumbersome and often enough not required. I must admit I really like the square shape of the Super-Angulon’s lens shade, it makes the Super-Angulon look super cool on any camera. If only this lens shade was functional! With the lens shade on, it is impossible to put the lens cap on, so you have tio decide: lens shade or lens hood. Either is not ideal for fast shooting.

Which brings us to the second point: the lens cap.

Due to the large front element, it is pretty easy to get a scratch on there. Now this would not be a problem if Leica would have produced a proper lens cap for this lens. Unfortunately the flimsy plastic cap constantly falls of (as it often does on Leica lenses). I really don’t understand why lenses in this price range need to be delivered with poor lens caps. All in all this is not very satisfying and most the time I ended up just having the lens shade on there and praying that nothing would touch the front element – so far so good.

The Super-Angulon is also a bit on the heavy side. This is certainly due to the excellent built quality – but when you mount the lens shade on there the lens feels a bit cumbersome and with the added weight you actually consider twice taking the Super-Angulon along.

In terms of image quality, the Super-Angulon has the same issues as most super wide angle lenses: vignetting and corner sharpness.

The vignetting is noticeable but still bearable. It is for instance better than on the Flektogon 20mm. Personally I can live with the amount of vignetting of the Super-Angulon and it even adds a bit of character sometimes.

What is more worrying is the corner sharpness. The lens is very sharp in the center so the softness in the corners is very noticeable. Unfortunately to a degree that is irritating sometimes. That is a pretty big let down. Overall the images then often look flawed and unbalanced. Sometimes it even looks like a composite. On a large format print out this would be very noticeable. Fortunately this will not affect people using the Leica-R Super-Angulon on a cropped sensor camera as the soft corners will be cropped out.

All-in-all I was hoping for a bit more from a lens in this price range. Value for money is not that amazing. You will have a better bang for the buck with the 20mm 2.8 and 20mm 4 Carl Zeiss Flektogons, which cost about 200 Euros less.

There are several lenses that were branded 21mm Super-Angulon, most famously the Leica M version. Here we only describe the Leica-R version.

The Super-Angulon comes in a black finish, typical for the Leica-R design of the time. Throughout it’s production process the lens stayed relatively unchaged. Both a 2-cam and 3-cam exist.