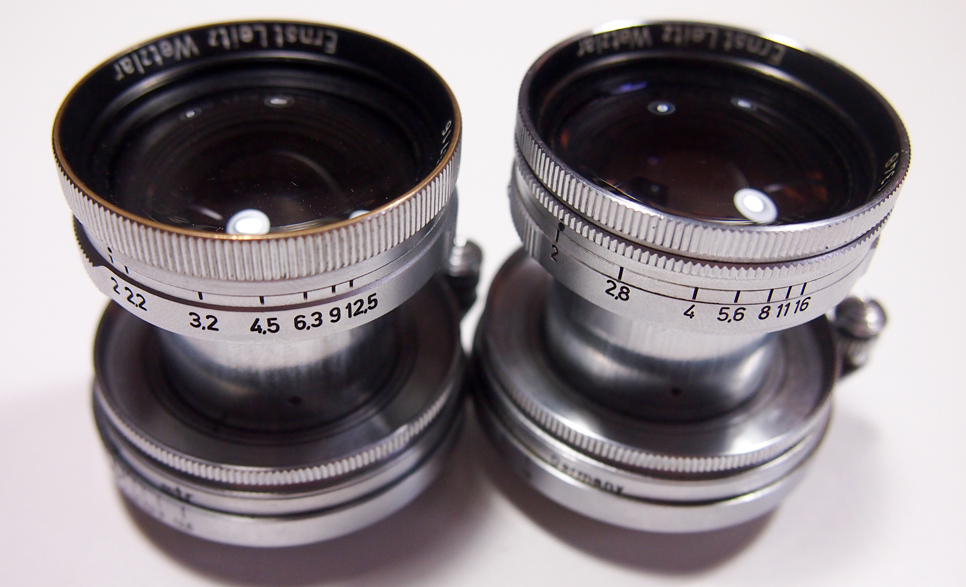 The Leitz Summitar 5cm f2 was produced from 1939 until 1953. It is a standard collapsible prime lens for Leica screw-mount cameras. The Summitar lens was also produced for the German military during the second world war.

The Leitz Summitar is a very compact prime lens for Leica cameras. When used on a Leica screwmount camera you can collapse the lens. That means that you could collapse the lens into the camera body when you are not using it. That way your gear fits into your pocket. Unfortunately this neat feat does not work on modern digital cameras.

As with all other Leica lenses the built quality is remarkable. Although it is tiny, the lens feels solid. All this glass and metal combine to over 200 grams.

When stopped down the lens is very good when it comes to sharpness and contrast. The colour are cracking and the images have a very nice feel to them. With the right settings the images can turn out really spectacular. The lens excels when it comes to contrast and translating different tones. You will need some time to getting used to this beautiful lens but the results can be very rewarding.

The bokeh is also very special. Wide open the lens might be soft but the centre of the image is still reasonably sharp. This results in a pretty even bokeh with a vintage touch. I am sure that some folks you are into artistic photography will love that.

If you want to use a Summitar make sure to know what you are doing. The lens is not forgiving at all. It is soft at open aperture and it absolutely hates image source from the side. Make sure to use a lens shade for best results. I have been shooting both with uncoated and coated lenses and there is a big difference when it comes to flares. The Summitar is not a point and shoot lens. If you know your sunny 16 rules and have experience with these lenses, the Summitar can really deliver but if you are not that used to vintage glass I would recommend looking somewhere else first.

Another aspect I did not like is that the lens is collapsible. This certainly makes sense when you use a proper Leica camera, but with an adapter on a digital camera collapsing the lens will not be possible. I was always a bit scared that the “slender” lens might get a slight knock that would harm the lens barrel. The Summitar also will not use screw on filters. The filters of the Summitar use a clamp-on system which is a bit annoying to use (and not practical at all). Hence, most lenses were used without a protective filter – which resulted in a lot of lenses having cleaning marks and scratches on the very fragile large front element.

Personally I do not really like the ergonomics of the Summitar. It certainly is a great classic lens but I do not like the fact that the aperture settings are so close to the front element. When the aperture blades are a bit stiff (which they often are after all these year) and you change the settings, by mistake you can collapse the lens or change the focusing. Overall the Summitar is much nicer to shoot on a Leica camera than on a digital camera. This might be harsh but I do not think that the Summitar translates to well to the modern age.

The 5cm Summitar was produced from 1939 until 1953. It followed the Leitz Summar and was the predecessor of the iconic Leitz Summicron. Compared to its predecessor,the Summitar has a larger front element resulting in better image quality.

Early models are not factory coated. Coated lenses were only introduced after the second world war, in november 1945 (#587601). During the second world war certain lenses were produced for the Geman army. These are highly collectible. They have specific engravings such as “Heer” or “Luftwaffen-Eigentum”. There are a lot of fakes!