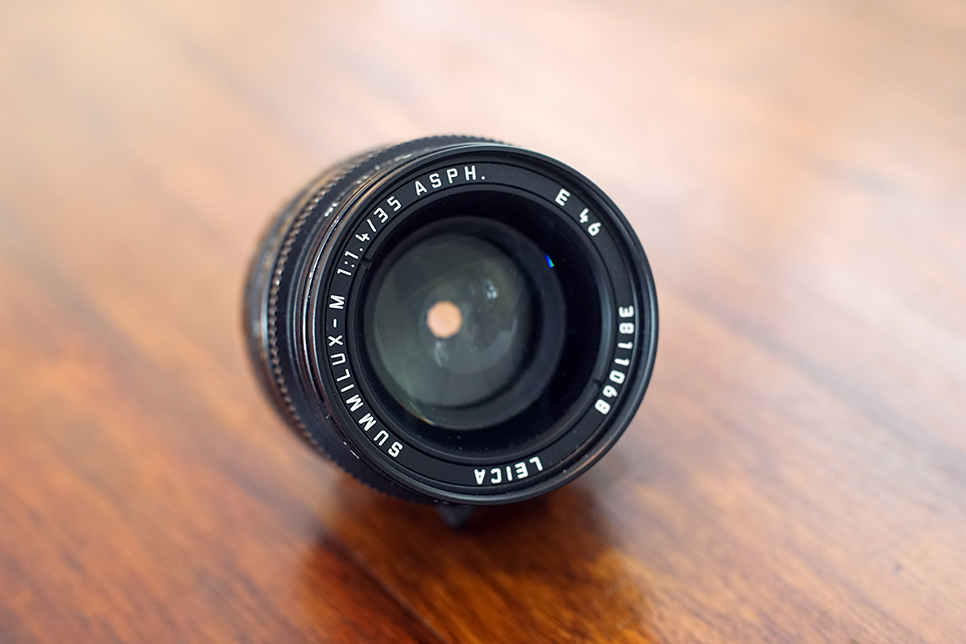 Launched in 1960 and still part of the Leica lens line-up nowadays, the Summilux-M 35 1.4 is the top of the line 35mm wide-angle lens for Leica M cameras. The Summilux is the big brother of the Summicron 35, being a slightly faster lens at over twice the price. The Summilux 35 1.4 is meant for those who have to shoot with available light, often under difficult circumstances: photojournalists.

I never aimed to own a Summilux 35mm lens. It was always way out of my price range. I am a fan of the classic Leica-M Summicron 35mm f2 lens and I could not justify paying double the price just to gain a slightly fast f stop. Most of the times you do not even shoot wide open – especially with a wide-angle lens, so I would rather keep my cash – thank you very much! Then one day, it must have been in 2012, I decided to go for a digital Leica M. I simply enjoyed shooting Leica M film rangefinders so much that I wanted to see what a digital camera could do. The Leica M8 and M8.2 did not have the best reviews in the world – but the M9 was rather decent, yet overpriced. But 3 years after its launch in 2009 you started to have decently priced ones popping up. Long story short: I found a Leica M9 with a Summilux lens for 3000 Euros. It was literally the last cash I had in my pocket. So I sold the Canon EOS 5D MKII I had at the time and jumped on the opportunity. Don’t worry, this is not a review of the Leica M9 (FYI: the only digital camera I regretted ever selling – several years later for 1600 Euros) but I want to give you insights on how I buy lenses. So effectively I ended up spending 1400 Euros on a Summilux-M 35mm 1.4. and I still have it today. I never actively seeked to own a Summilux-M, but it simply found its’ way towards me. Sometimes life is like that.

My fist impression were: 1- this is a big lens for a 35mm Leica lens – at least compared to other 35mm Leitz alternatives, 2- the Summilux has a concave element like the Carl Zeiss Ultron. At first I rarely used it. I was too afraid to do something stupid like dropping it. I was also rather accustomed to using the Summicron 35mm and was always happy with the results. Problem was: I was using a Leica M9 now, and in low light that means trouble as the sensor of the digital Leica was (and to some extent still is) not really meant for super low light photography. Go beyond ISO800 on that thing and you are in noise hell (or just pretend it is a grainy film look).

So let us start reviewing this lens for the reason most people would consider purchasing it: low light capabilities. One day I was asked to shoot some promotional shots in a rather dimly lite bar in Berlin. I knew that I was in trouble with the Leica M9 and had to compensate using the fastest Leica glass I had: it was the Summilux 35 – I had no choice but to make this combo work. So there I was shooting with the Summilux on a Leica M9 at a max of ISO800. This is when I realized how good this piece of glass actually was. I was able to shoot wide open at f1.4 and it still captured so much detail. There wasn’t a hint of softness. There also is as good as no distortion. Lines are as straight as they should be.

I was really impressed by the sharpness and the amount of details that this lens captures. Most lenses, when shot wide open will lack sharpness. You will need to stop them down a bit to achieve the best results – not so the Summilux. This is a common theme among this type of expensive glass: you pay a lot but you also get a lot wide open. I am full of confidence when shooting the Summilux-M 35mm wide open – I can’t say that about most 50mm lenses. That in itself is a great feature of this lens.

Image quality is also really good when you shoot during the daily. For an assignment I was shooting Rohingya refugees in Bangladesh at the beginning of their exodus from Myanmar. It was a very tough environment to shoot in: extreme heat, high humidity, loads of dust and fierce and intense sunlight – not to mention the human tragedy unfolding under your eyes.

I shot exclusively with the Summilux-M 35mm and it did remarkably well. I wanted to use a light and versatile setup: don’t bring tons of gear, no lens changes with sweaty hands, use a wide angle that is sharp enough for portraits, have a lens that is fast enough to shoot inside dark huts and is able to create enough contrast and separation under the tropical sun. The choice fell on the Summilux-M 35 and it did not disappoint. It fully fulfilled all my requirements and I was able to concentrate on my work and less on the camera and lens. I was in the zone with the Summilux.

What I like about the Summilux 35 (and the Summicron 35 too) is that it manages to create separation. There is a hint of bokeh, but nothing distracting, and at the same time you get this 3D kinda look. Images don’t turn out flat, they have more depth and you get a sense for distances. The colours are also rendered very accurately.

I must say it felt a bit strange to run around traumatized, penniless refugees with a 4 digit lens around your neck – but these, unfortunately, are the strange aspects of this profession. What I can tell you is that nobody felt threatened by my small setup. I was glad I was not pointing a huge modern zoom lens at these people – many of whom have been shot at and experienced trauma. That is another perk of the Summilux 35mm. Although bigger than the Summicron 35, it still is much smaller than any auto-focus lens. I do also love my Leica (and vintage) glass for that reason.

It’s pricey!! You will need pretty deep pockets for the Summilux 35. You do get a lot of glass for your money – but you can also spend 4000 on a car, holiday(s) or many other things. I was lucky enough to score this lens used on the cheap – I don’t think I could justify spending that much on another 35mm lens. Granted, the Summilux is certainly up there with the best you can get in this focal length. If you end up buying one it will certainly be the only 35mm lens you ever need. But in 99% of situations a Summicron 35mm will also do. So saving up that extra cash is certainly a point worth thinking about. Personally I would not buy a Summilux if I already have a Summicron (#firstworldproblems).

The Summilux 35 is by no means flawless. There are a couple of points, besides the price, that are worth mentioning. Firstly, other photographers mentioned to me that there is a slight focus shift (I personally have never noticed it but it might be due to way I shoot). What is focus shift you ask? Simple: imagine you are shooting the lens at f2 and taking a portrait of someone. At f2 the eyes are perfectly in focus. Now imagine you changed your mind and are opening up the aperture to f1.4. The focus would then shift slightly from the eyes to the tip of the nose. It means that each time you change the aperture you need to refocus – hence you lose time and might miss the golden opportunity. I focus every time I take a shot but for photographers you use zonal focusing this can be annoying. Also, some people like to adapt lenses on digital and prefer nailing down the focus when the lens is wide open before closing the aperture – in that case the focus might have shifted. This does not bother me at all and I have never encountered any issues but I thought its better to have it in mind before spending a left kidney on a lens.

If you shoot this lens on a Leica M body there will be some viewfinder blockage, especially if you use the lens shade. Luckily the lens shade has a cut out corner so you basically look through the lens shade (if that makes sense) but slight blockage still occurs and it can be a bit annoying. These plastic Leica lens caps can also be a pain. If you read my previous Leica lens reviews you know how much I like their lens caps. Fiddly little plastic things that keep falling off. If you spend that amount of cash on a lens you want to have a proper lens cap that protects the front element – not something that falls off as soon as the camera is in your bag. It is rather unsettling knowing there might be no protection.

Finally I want to share something about the markings – not something that is often being commented about when doing a lens review. I used the Summilux 35 extensively in tropical countries with high humidity and after a while, through the exposure to sweat and humidity, the paint that fills the markings vanishes. It’s not a huge deal because you can get that fixed. Still it is a bit weird that for such an expensive lens such a detail was not considered – especially since the Summilux is geared towards photojournalists.

All things considered though this is an outstanding lens – if you have the resources and want the top of the top you should consider having a look at it. The choice of 35mm lenses available on the market is almost endless but the Summilux 35mm is up there on top of the pecking order. If money was not an issue and I could only have one 35mm lens for the rest of my life – it might well be the Leica 35mm Summilux-M.

Launched in 1960 and manufactured until 1990, the first version was manufactured in silver and black finish. As the flagship Leica M3 camera of the time did not have framelines for 35mm lenses in the viewfinder, a version of the Summilux-M was made with goggles enabling you to focus it. For usage on Leica M2 and subsequent Leicas, a version without goggles was also made. The first version of the Summilux-M is renowned for its lack of distortion. Unsurprisingly, when shot wide open at f1.4 is it less sharp than the following more modern versions.

Built for only four years from 1990 to 1994, this is the first aspherical version of the Summilux 35. Unlike the previous version this one has 9 elements in 5 groups, two aspherical surfaces and comes with both a front and rear concave element.

Launched in 1994, the third version is still being produced today. Unlike the previous version, the current version only has one aspherical element. The both concave elements at the front and back remained unchanged.