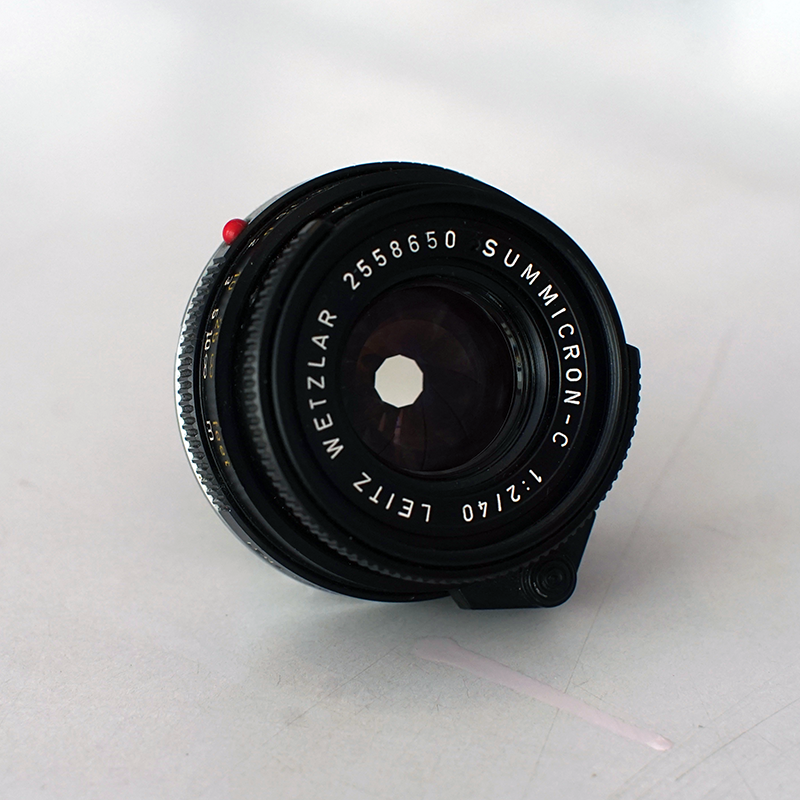 The Summicron-C 40mm 1:2 is a very compact 40mm lens that often does not receive the credit it deserves. It emerged from a cooperation between Leica and Minolta and thus many Leica aficionados claim the Summicron-C is not a real Leica lens. This is great for people who are primarily interested in shooting (and not collecting) as you will not get many other Leica-M lenses with the same value for money ratio as the Summicron-C 40mm 1:2.

I like this lens a lot. Although I have many lenses to choose from, the Summicron-C 40mm is one of those I always end up using. Don’t get me wrong – there are better Leica-M mount lenses around but the Summicron-C is a pure joy to use, it is tiny, weighs nothing and is really sharp. Due to its’ compact size and lightweight built it is also one of those lenses that is not a burden to carry. You will often carry it along as it fits even in your coat pocket. In terms of size it is comparable to a 35mm Summicron except that the 40mm Summicron-C has a pretty clever collapsible rubber lens shade. The lens shade might not look great but it is very handy and I always leave it on my lens as an extra protection. All in all the Summicron-C has such a nice compact construction that it really is one of my main travel companions during longer trips.

Another reason I really like the Summicron-C is the rather unusual focal length of 40mm. At first you might think that 40mm is a bit odd. It’s not really a wide angle lens and it’s not really a standard 50mm prime lens. It’s something in between and I really like that. 40mm lenses are rather uncommon. They were mostly used for point and shoot cameras as they can be used both for landscape, street and portraiture photography. 40mm is just perfect for covering almost any kind of situation be it a group photo, street scene or panorama. I like this versatility, the fact that I don’t have this restriction of a lens being more suitable for a specific style of photography. I also think that 40mm is a bit more suitable for portraits than 35mm where the distortion can start to kick in. 40mm is simply a pretty nice focal length to cover many situations.

Let’s move on to the image quality which is really pretty good. Images turn out nice and sharp. The image quality is more like a modern lens than a classic vintage lens – especially in terms of sharpness. A lot of details are being displayed. It’s the type of lens where you will basically not spend much time in post processing. Straight out of the camera the pictures look great.

Colours are nice and beautifully saturated and feel alive. You get a bit of the “3D look” the big brother the 35mm Summicron is famous for. What I also really like is the contrast. The lens manages to handle a wide range of light in a single frame. Both sunny bright and shadowy dark spots will be nicely captured in a vivid manner. The coating of the lens also seems to be very good. Flaring is rather rare and, if it does happen, you have this super neat and compact lens shade that you can simply flip over.

All in all the Summicron-C 40mm is a very good lens that will blow you away with it’s usefulness. Also, it is one of the most affordable Leica M mount lenses. If you are lucky you can get a Leica CL with the Summicron-C 40mm for about 200 to 300 dollars, which is a real steal! It’s a very undervalued package that I highly recommend looking into if you haven’t already done so. The Leica CL is also a really nice and compact 35mm camera!

Overall the Summicron-C 40mm is a very good lens. I really appreciate it a lot. It is a great performer for most situations and it is very versatile. In terms of optical performance there are only two things I could criticize: the bokeh and the minimum focusing distance.

80cm is not super bad for minimum focusing distance but there are loads of wide angle lenses that let you get much closer to your subject. It is nice to be able to get really close sometimes and I am afraid the Summicron-C is not meant for doing that.

Another drawback is the bokeh – it is not that nice to be honest. This is where you would expect much more from a lens with Leica DNA. All the other Summicrons are miles ahead in this regard. The bokeh is a bit to rough for my liking. It’s not that pleasant on the eye, which is a shame but you can’t have it all (especially at that price).

Normally most Leica lenses have a focal length of 35mm or below or 50mm and above. Hence most Leica cameras do not have 40mm framelines in their viewfinder (normally they will have 35mm, 50mm and 90mm framelines). So if you use the Summicron-C 40mm on a Leica-M body other than the Leica CL you will have to guesstimate what the 40mm frames would look like. So excact framing could be an issue. Obviously if you use the Summicron-C 40mm on a digital SLR or mirror-less camera with an adapter you will not have this issue.

Still, the Summicron-C is a really nice lens at a very reasonable price. For a Leica lens, this is the best value for money you will probably get. I highly recommend the Summicron-C 40mm.

The lens was manufactured by Leitz Wetzlar in Germany from 1973 until 1977. The Summicron-C was also manufactured by Minolta in Japan and branded Minolta M-Rokkor 40mm 1:2. Both the Leica and Minolta version are almost identical, although they use a different filter mount. The Leica Summicron-C was sold in Europe and America with the Leica CL camera and the Minolta M-Rokkor 40mm 1:2 was sold in Japan with the Minolta CLE camera.