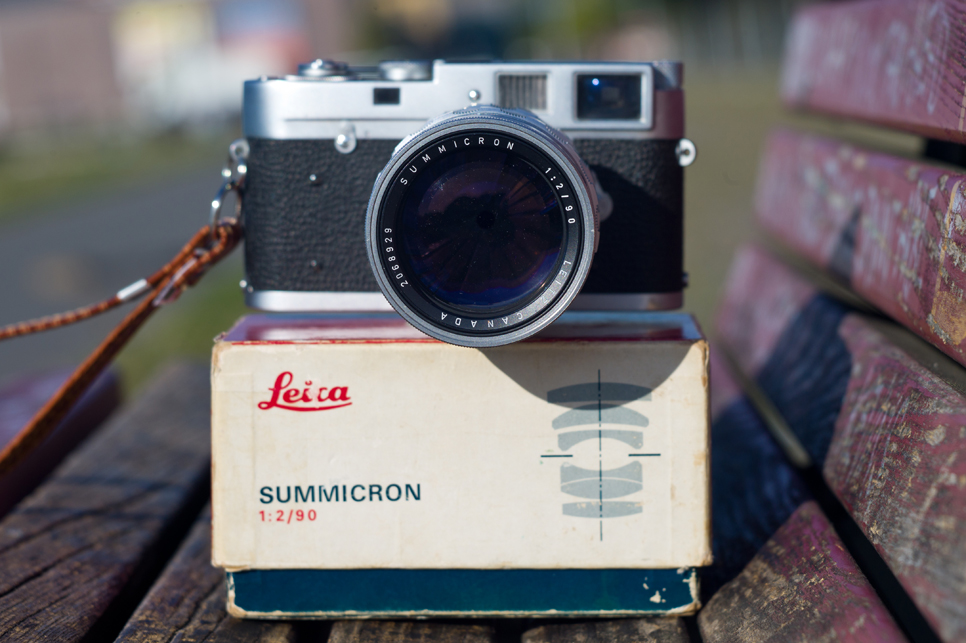 The Summicron 90 f2 is a gem of a lens. Optically and mechanically this lens is top notch. In my humble opinion this is one of the prettiest lenses ever made, a real beauty.

I still remember the day I first go my hands on my first Summicron 90. I bought a Leica M3 with 2 lenses from a Lawyer in Berlin. One of those lenses was the Summicron in its’ original box. It seemed barely used. I know this sounds crazy but I was kind of in owe of this lens. Although I had seen hundreds of other lenses before, the Summicron seemed different and kind of demanded respect. How can and object have such an effect on me? It certainly was a combination of different factors:

The Summicron 90 is a joy to use. Both the ergonomics of the lens and the results you obtain are pure quality. The lens screams quality of the highest standard. I love the differently riffled surface. This gem a joy to use.

The image quality is outstanding. F2 does not sound like much and there are certainly faster lenses around. Unlike other faster lenses you can actually use the Summicron 90 wide open and obtain really sharp results with a narrow depth of field. There is no softness: you obtain a sharp focusing area and a very good bokeh. There is no need to readjust the contrast during post production, the images are just perfect straight out of the camera.

With a focal length of 90mm this is an ideal portraiture lens. As with the Elmarit 90, the Summicron 90 has really won me over. I had my reservation, maybe a bit too much respect of the lens at the beginning, but the Summicron 90 is actually an awesome workhorse that delivers beautiful results. In my eyes this is not a pure collectors item that is meant to spend the rest of its life in a box on a shelf. No, this lens is meant to be used and if you do you will get rewarded with some magical pictures.

Ok this lens is not cheap. For a Leica lens the price is still bearable but there are loads of other portraiture lenses around at a fraction of the price. If you are looking for a cheaper Leica alternative have a look at the Elmarit 90.

The main reason I don’t use it that much is the size and weight factor. This lens has its own tripod attachment for a reason: it is big and heavy. On a lightweight camera body this might be an issue. Additionally this will be the main if not only lens that you will carry around. Unlike other tiny Leica lenses this thing is huge and takes a lot of space.

I still believe that a lot of people will absolutely adore this beauty.

This is the first version developed by Wilhelm Albrecht and produced by Leica in Wetzlar Germany. About 100 items were produced, having serial number ranging from 1.119.001 and 1.119.100. These lenses are extremely rare and very expensive. This lens does not have an integrated lens hood, instead a special lens shade made out of aluminium could be used. The front ring is marked “Ernst Leitz GmbH Wetzlar Summicron f = 9 cm 1:2” and the serial number.

In 1957 the production moved to the new Leica plant in Midland, Ontario, Canada. The famous optical engineer Dr. Walter Mandler recalculated the original formula of the lens and a few improvements were made to the Summicron 90. He was one of the first to use computer aided calculations. These lenses had serials ranging from 1.477.001 to 1.477.100 and 1.580.001 and 1.581.00. It is estimated that around 1100 were made, some allready with a Leica M mount. The distance scale is indicated in feet. This version also does not have the integrated lens shade yet. The engravings on the front ring read “Ernst Leitz Canada Ltd. Midland Summicron f = 9 cm 1:2” and the serial number.

This is the last screwmount version of the Summicron 90. It already has the same style as the later Leica M version. The lens hood is now integrated. The distance scale is marked both in feet and meters. Only 490 copies of this screwmount version were made before the production was discontinued in march 1963. This was the first version that could be used on a Visoflex by unscrewing the top part of the lens.

In 1963 the production switched completely to Leica M lenses. Actually the lens production did not change that much as screwmount lenses were simply fitted with an integrated Leica M adapter. The lens now has an integrated tripod attachment. The engravings on the front ring read “Summicron 1:2 / 90 Leitz Canada” and the serial number. This is the most common version.