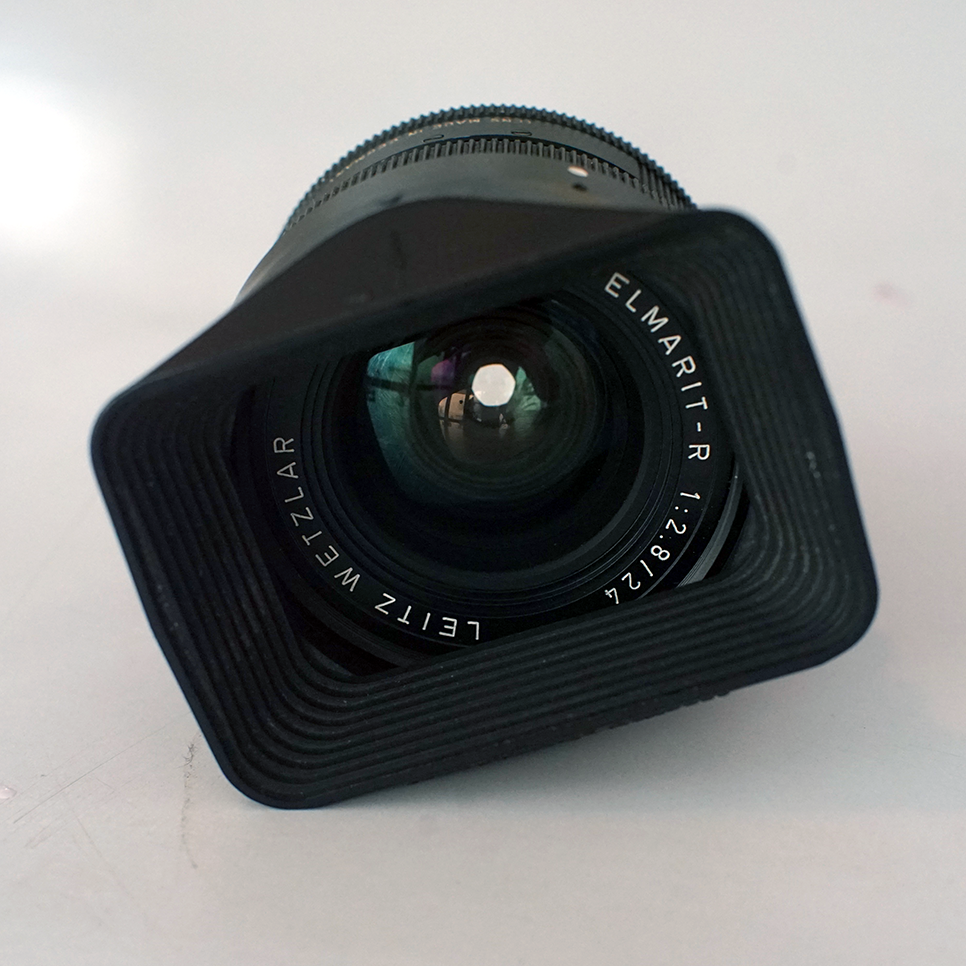 The Leica Elmarit-R 2.8 / 24mm lens is a wide angle lens manufactured for the Leica-R 35mm cameras. The lens was introduced in 1974 and was produced until 2006. In total about 20 000 lenses were manufactured. The initial design was developed by the Minolta company.

The Elmarit-R is a good super wide angle lens with great image quality. Although it is not a cheap lens, it is highly appreciated by landscape and architectural photographers for its’ sharpness and lack of distortion.

The Leica Elmarit-R 2.8 / 24mm is a very solidly built lens. The all metal construction feels very rigid and well manufactured. Thanks to the riffled surface and the distinct aperture clicks you receive a lot of feedback from the lens when you are operating it. It does not feel like a cheap lens at all, which is reassuring. I also want to mention the lens shade, which is particularly nice. A lot of lenses (especially a lot of Leica lenses) have fiddly, kind of cheap feeling lens shades which can fall of. When you operate a wide angle lens with a large front element a good lens shade is important. The Elmarit-R 24 has a great lens shade. It feels solidly attached to the lens, it is not gigantic, feels just perfectly balanced and just looks pretty cool. Basically I never take of the lens shade because I trust it to be solid and it does the job – in my opinion this is what a good lens shade is all about.

The image quality is very good. I am particularly impressed by the corner to corner sharpness and the lack of distortion. Normally, most super wide angle lenses will be sharp in the center and will have a distinct lack of sharpness in the corners – the Elmarit-R 24mm manages to keep this disadvantage under control. There is a slight fall-off in the corners but nothing dramatic. It handles it much better than many other lenses with comparable focal lengths, such as for example the 20mm 4 Flektogon or the Leica-R Super-Angulon 21mm 4.

There is also no significant vignetting. Images simply turn out pleasant to look at and don’t exhibit that many technical flaws. The brightness across the whole image is pretty much on par. That is a great feature to have in a super wide angle lens. Another good aspect of the Elmarit-R 24 lens is that it handles distortion well. Lines will end up being straight. This means that the Elmarit-R 24 is particularly well suited for landscape and architectural photography.

The overall sharpness is also good across the line. Even with an open aperture the lens manages to capture a lot of details. This also allows you to use the Elmarit-R 24 as a macro lens as the minimum focusing distance of 30 centimeters really let’s you get in very close with your subject.

All in all the Elmarit-R 24mm 2.8 is a very good lens. If you have the budget and you want a wide angle lens that performs solidly across the board without having any dramatic weaknesses – take a look at the Elmarit-R 24, you might not be disappointed.

Although well made and rather compact, the lens feels a bit on the heavy side. It’s an all metal construction with floating elements that almost weighs half a kilogram – after a long day you do notice it in your camera bag. The lens was manufactured for the Leica-R cameras, which are pretty heavy themselves, and I can image that the Leica Elmarit-R 2.8 / 24mm feels a bit off balance on lightweight modern cameras.

As most lenses with a large front element flaring can occur – so make sure to use the lens shade. If you want to be really picky you could argue that in some situation the lens could deliver a bit more contrast – but honestly that is a matter of personal taste and not really a flaw of the lens.

The Leica Elmarit-R 2.8 / 24mm is a very solidly performing wide angle lens. This obviously comes at a price and used lenses generally start at $500 and can easily go for more than $1 000 depending on the version and the condition. That’s a pretty big chunk of money and there are cheaper alternatives available such as the Carl Zeiss 20mm 2.8 Flektogon.