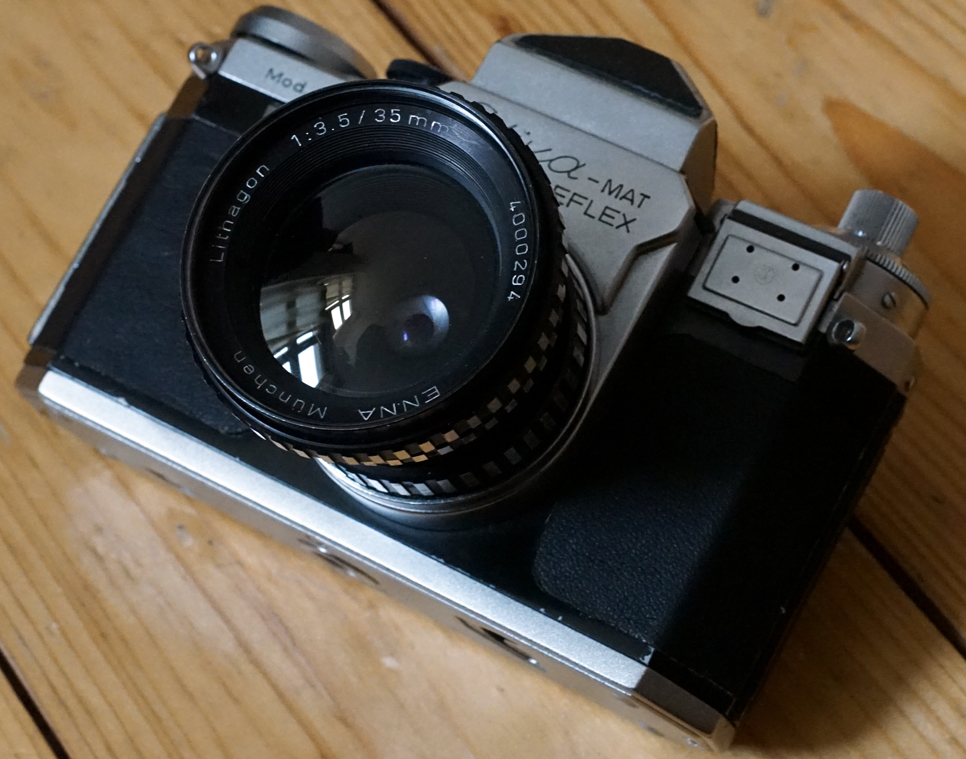 The Enna München Lithagon 3.5 35mm is a wide angle lens manufactured in West Germany by the ENNA company from Munich. The lens was produced in the 1960s and 1970s.

The ENNA company was mainly famous as an early third party supplier for various camera manufacturers. One of their main selling points was that some of their lenses had an interchangeable lens mount (you could unscrew the lens barrel to change the mount in order to use it on a different camera). At the time that was pretty groundbreaking!

“Lithagon” was the name given to a wide range of ENNA wide angle 35mm lenses. These Lithagon lenses were made with different light sensibility throughout the years, ranging from f1.9 (Super-Lithagon) to f4.5. This article is about the Lithagon f3.5 35mm lens.

The 35mm 3.5 Lithagon is a bit of an odd lens, not only due to its shape but also due to its performance.

Unlike most other 35mm prime lenses which have a straight lens barrel the Lithagon is cone shaped, almost like a 20mm Flektogon. I was curious and excited when I first saw the lens and expected something new and refreshing. The Zebra styling is also pretty cool. Unfortunately I have been rather disappointed.  The lens does alright across the line but is worse than most other 35mm prime lenses I tried. I suspect that some people who are into artsy photography and want a somewhat odd look will like the vignetting, lack of contrast and modest sharpness it produces. If you are after a somewhat slower 35mm lens, I would rather have a look at the 35mm 3.4 Carl Zeiss Skoparex instead.

There are loads of 35mm lenses to choose from. Every manufacturer made several 35mm prime lenses and is it not easy to find the right one for you. The Lithagon is in my opinion not really worth considering, especially since it is not that widely available as it was produced in rather small numbers.

First of all the ergonomics are odd. When you turn the focusing ring, the aperture ring also turns, that is a bit weird at first and unfortunately you never really get used to it. You constantly have to check which aperture you are on. With other lenses you kind of get a sense of where the aperture settings are – not with the Lithagon.

The lens is also rather large, especially when you consider that it is not particularly fast. It feels mush chunkier than a Lydith or a Flektogon, which is a  faster (and both are better) lenses. The Lithagon also has this weird cone shaped form. It feels cumbersome.

Besides the ergonomics another major drawback is the image quality. The lens is soft, even when stopped down. The softness is very bad in the corners and pretty bad in the center. Images turn out lacking contrast. The bokeh is alright but not particularly spectacular. On top of that there is a lot of vignetting.

All in all there are a lot of other 35mm prime lenses that perform much better than the Lithagon. I can’t really recommend this one.

Two different versions of the Enna München Lithagon 3.5 35mm Versions exist. They are easily distinguishable: the early version is all silver while the later version as the typical “Zebra” styling (black and silver stripes).

The first version is a shinny silver metal construction. This early version was also made in limited numbers for the Praktina cameras. M42 lenses also exist – but beware they will NOT fit most adapters (at least they never worked on any M42 adapter I tried). Just like the early Carl Zeiss Tessar 50mm lenses manufactured in M42 mount the lens mount is slightly wider than later M42 mounts.

Unlike the later Zebra version, the silver version has a minimum focusing distance of 40 cm.

The second versions has the typical black and silver “Zebra” stripes that were very fashionable at the time. This version is only available in M42 and EXA / EXAKTA mount.