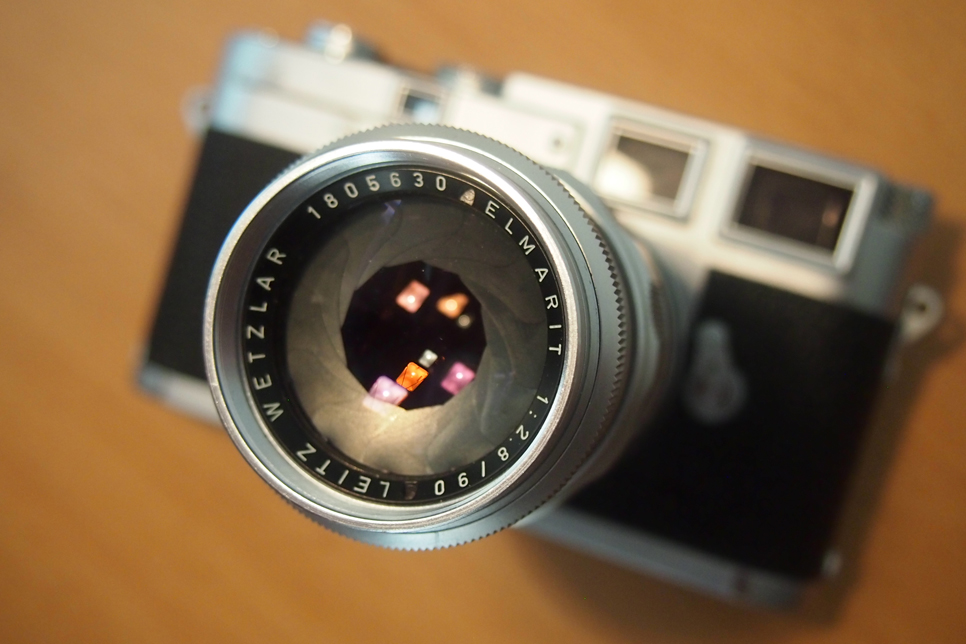 The Elmarit 1:2.8 / 90 is an outstanding lens manufactured in Germany by Ernt Leitz for the Leica srewmount & Leica M rangefinder cameras. It was produced from 1959 until 1975. The Elmarit was designed by the ingenious Leica optical designer Walter Mandler.

The Elmarit 2.8. 90mm is probably not the first choice 90 mm lens for Leica enthusiasts. Normally the Summicron 90mm is the faster and more famous alternative in the 90 mm Leica range. I assume this is due to the fact that the Summicron is faster (and for some reason we consider faster lenses to be better lenses). Furthermore the Summicron was produced in larger quantities than the Elmarit.

I do not think that this is a fair assessment, as the Elmarit is a superb lens in its own right. I also had my doubt when I first came in contact with the Elmarit. It proved me wrong: I really enjoy using the Elmarit 2.8. 90mm lens.

By chance I obtained a pristine copy in perfect condition without a single scratch. I doubt the previous owner ever used it, he too probably had his reservations. I am more a user than a collector but it is always nice to obtain a vintage lens in the condition it initially left the factory 50 years ago.

As you would expect from a Leica lens, the craftsmanship of the Elmarit is outstanding. The Elmarit is rather small and compact (compared to the 90 Summicron) and the lens barrel is slim. The lens is made out of metal with a chrome finish (early version) and a black finish (second version, after 1968). Aperture settings have distinct clicks. The Elmarit also has a few unusual design aspects, which makes this lens rather special:

That all sounds good but how is the image quality? Great!

The Elmarit has become one of my favourite portraiture lenses. You obtain sharpness, colours, contrast and a good (not over the top) bokeh. All the ingredients you need for portraiture and product photography. Many times I took the Elmarit along to a shoot as a backup lens simply because it is small and not cumbersome. More than once that “backup” lens ended up to be the primary lens used during the shoot. Normally I set the aperture of f4 to f5.6 using only available light and I obtain beautiful pictures straight out of the camera – no post production required.

The beauty about Leica gear is that if you take good care of it you can still sell if you don’t like it – over time probably even with a profit. For a Leica lens, the Elmarit is even on the “cheap” side. If portraiture is your thing give the Elmarit a go!

Although the Elmarit is rather “cheap” for a Leica lens it still is a considerable investment if you want a copy in good condition. At f2.8 it is also not the fasted lens around. There are much faster lenses with a similar focal length using both Leica mounts (e.g.: Summicron 90, Jupiter-9) and other amounts (e.g.: Pancolar 1.8 80, Pentax 1.8 85).

Additionally, the minimum focusing distance of 100cm and the good but not overwhelming bokeh could be seen as rather dull. I personally like the bokeh as it is not over the top and the backdrop is not distracting from your actual subject. If you want a portraiture lens that offers more twirls and a more arty bokeh you should rather go for the 100 Trioplan or a Biotar type lens.

Overall I have been super positively surprised by the Elmarit. The amount of good pictures you obtain with this lens is clearly above average compared to other glass. Therefore my Elmarit is definitely a keeper!

The Elmarit 2.8 90 was first introduced in 1959 and was produced until 1975 for the Leica M cameras. Early versions are silver while later versions produced after 1968 have a black finish.

The Elmarit has the novelty of having a removable lens head (Leica code ELKOO) which can be used for macro photography with the Visoflex range of Leica bellows for the Leica M camera. When used with the bellows, the lens provides a focusing range from infinity to life size.