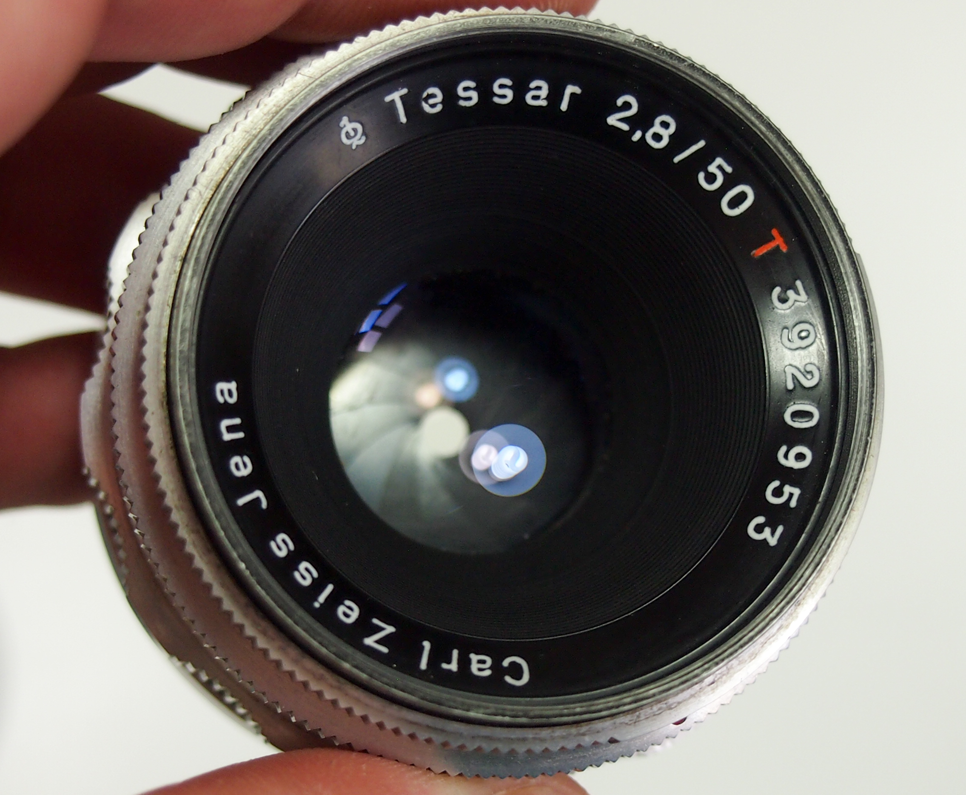 The Carl Zeiss Jena Tessar 50mm 2.8 is a classic example of a vintage prime lens. The Tessar construction dates back to 1902 and was computed by the German physicist Paul Rudolph.The Tessar lens construction was one of the most widely used lens construction. It was used for for large format cameras, enlargers, compact cameras, twin lens reflex as well as SLRs.

Carl Zeiss Jena Tessar 50mm 2.8 is often referred to as “Adlerauge” (Eagle’s eye) due to its’ outstanding image quality and sharpness. Light and compact it can deliver very sharp images paired with good ergonomics. The Tessar lens is often available at an unbeatable low price and offers a lot of bang for the buck.

The Carl Zeiss Tessar is the classic 50mm prime lens

Very compact and light, the Tessar is a nice “all purpose lens”. With only four lens elements it is one of the simplest lens construction but it does its’ job well. From landscape to artistic to portraiture photography – the Tessar is able to deliver good results.

Some people argue that it is sharper than the Carl Zeiss Pancolar 1.8 50mm lens. It is true that the Tessar is a good performer when it comes to sharpness, especially when shot above f5.6.

With its minimum focusing distance of only 35cm, it is also a nice lens to use for macro shots. The bokeh has a slight twirl to it (not as much as the 80mm Biometar), which can be very appealing for portraiture. These lenses go for about 50 dollars on Ebay and at this price it is a bargain deal.

Outdoors the Tessar will perform great but indoors, when the lighting conditions are not excellent, you might get into trouble with that slow F2.8. I would rather use the Carl Zeiss Pancolar 1.8 50mm because I think that its’ bokeh is more appealing and the extra F stop does give you an advantage when you need it. Also, the build quality is not on the same level.

The Tessar lens was was first designed in 1902 and presents itself in all different shapes and sizes. It is one of the most produced lenses ever and is available with different mounts such as Praktina, M42 / Pentax Mount, EXA / Exakta mount and Icarex BM mount. Due to its’ extremely long production run as a the standard 50mm prime lens of Carl Zeiss, there are a lot of different versions of this classic lens.

The pre-war Carl Zeiss Tessar 2.8 50mm lens (for 35mm format) was mostly produced for the Contax rangefinder system and the early Exakta cameras. Some of these lenses were also created in Leica M39 mount. These lenses are nowadays rather collectible. They are un-coated collapsible lenses that represent a fine example of early lens craftsmanship made for 35mm film.

Following Wolrd War II, the first production run of the Carl Zeiss Tessar 5cm 2.8 started in 1950. The lens formula was calculated by Dr. Harry Zöllner in 1947. These lenses were manufactured mostly in Exa/Exakta mount but also in M42 mount for the Contax D cameras. When coated they are marked with a red T. The early version is probably one of the smallest and lightest 50mm prime lenses around, weighing only 114 grams.

In case you want to use the M42 type with an adapter: this early version of the M42 mount is slightly extruding and does not fit most adapters I have tried. The problem also persists with the Tessar 3.5 50 built in the same period.

Following the early version, the Tessar lens with a “Vorwahlspringblende” was introduced. That means that the aperture is set by pressing down the aperture ring and then turning it. If you just turn the aperture ring the aperture blades will reset to the initial position. It was an all aluminum construction (silver). These older versions tend to have a longer focusing distance of approx. 50cm. At 181 grams it is also much bulkier and heavier. All lens are coated.

Last silver version of the Tessar 2.8 50

The last silver version of the Carl Zeiss Tessar 2.8 50 was introduced in 1956. Most of these version have an Exa / Exakta mount. After the bulkier previous version, the designers at Zeiss opted for a more compact lens design. All lenses are coated.

The “Zebra” version is probably the most sought after Tessar version (along with the first Version).  In terms of easy of use this is probably the version I would recommend Tessar, along with the following all black version. The Zebra has black and silver stripes and uses “normal” aperture settings. It was manufactured both in M42 and EXA mount.

The final version is completely black and only manufactured in M42 mount. The serial number system at Zeiss Jena was shortened. Some lenses are marked Carl Zeiss Tessar while others, which were meant for export, are simply marked with aus Jena T DDR. Either way, they are both the exact same lens. The only difference is that at the time of production Carl Zeiss Jena (East Germany) did not own the copyright to the name Tessar which was also being produced in West Germany by Carl Zeiss Oberkochen among others. This version tends to be less expensive.

Here is another short example video shot using a full frame Canon at f2.8. Note that everything is a bit blurry / dreamy with the lens wide open.