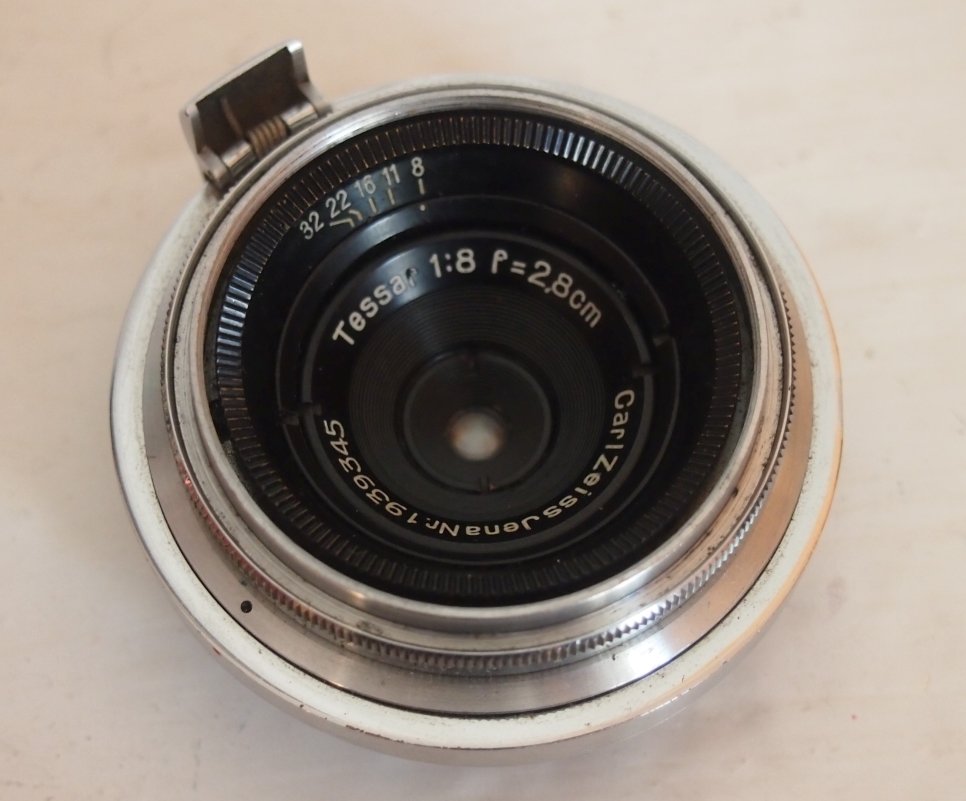 The Carl Zeiss Jena Tessar 2.8cm f8 is a wide-angle lens manufactured in the 1930ies for the Contax Rangefinder camera system. It represents one of the earlier attempts of a very compact wide angle lens for the 35mm film format. This 28mm lens was in many aspects far ahead of its’ time.

One thing I always find fascinating about old glass is that vintage lenses are stripped down to the bare minimum. There are no fancy floating elements, no unnecessary rubber plastic strips, no electronics, no big autofocus. Old glass has nothing but the essentials, and it really shows how little you actually need to make a lens. The Tessar 2,8cm is a prime example for this. The lens is a lightweight midget. The glass elements are ridiculously small. This thing is closer to a pinhole lens than to a modern wide-angle one. But don’t get me wrong, the Carl Zeiss Jena Tessar 2,8cm f8 was actually very advanced for its’ time. In the 1930ies it was a groundbreaking concept that barely had any competitors. In terms of age and handling it resembles the Carl Zeiss Jena Topogon 25mm f4, also manufactured for Contax rangefinder cameras. Everything is super compact.

The internal glass element protrudes far into the camera, it hangs very closely to the film (and on digital this is not a good thing as it is very close to your sensor, which causes extra vignetting). On the plus side you could argue that the lens has loads of “character”. For those who like artsy pictures with loads of vignetting and old school softness, the Tessar 2,8cm might be a fun side-kick.

If I had written this review in the thirties I would give this lens 2 thumbs up for being groundbreaking and allowing a different type of photography. It still is a technological marvel that many people would enjoy to own. Unfortunately when you purely look at the shooting experience and optical performance it simply is not top notch anymore. Kudos to this 90 year old but honestly speaking, with this grandpa the CONs far outweigh the PROs. Yes you could argue that the lens is rare and will retain (or increase) in value – but apart from the size and weight and fun optical output the Tessar 28mm feels far outdated. For collectors it might be a GO but for users I would say: NO. There are better alternatives available that will provide you with more joy (and cash).

Having a small and tiny lens is great. It fits in your pocket and can come along anywhere you got. Problem is it makes the ergonomics incredibly painful to use. As with many older Zeiss and Leica lenses, the aperture setting is situated in the inside ring of the lens, close the front element. You basically have to put your finger inside the lens to set it. There is no ring on the outside so you need to constantly check at which aperture you are at. This is a bit annoying as you might inadvertently touch the front glass element. Try doing that on a colder day when your fingers are a bit numb. It’s a bit of a pain in the proverbial. Quick note for those who wish to use the lens on a non-Contax RF body, for example with an adapter for a digital camera – RF lenses have 2 types of mounts: one is internal (most lenses use this one) and some lenses, like the Tessar 28mm, use the external mount ( which is less common, the lens is wider than the camera mount). So make sure you have an adapter that offers both internal and external mount compatibility for RF lenses.

Another aspect to keep in mind is that when used natively on a classic Contax Rangefinder camera, the lens is uncoupled from the meter. That means that you cannot set the focusing in your camera. You need an additional external distance meter. This obviously does not apply on digital cameras.

The Contax RF 2.8cm Tessar lens is rather rare. Anything made by Zeiss that is rare is also automatically expensive. For a decent copy you will need to pay around 300 Euros but prices can easily double for mint condition or the black version. That is a lot of money for a rather disappointing optical performance. Although you need to factor in the age of the lenses and their historical importance and advanced design for the time – by today’s standard their are sub-par. If you simply want to shoot you have many much better alternatives around.

The optical performance is rather underwhelming. Vignetting is very noticeable. Sharpness is not a strong point either. There is some chromatic aberration and lack of contrast. Fastest aperture is f8 – which in theory means it is pretty in focus everywhere but the reality looks rather smudgy. All-in-all this wasn’t my favorite lens to use both in terms of shooting pleasure and results.

There are essentially two versions of the Carl Zeiss Jena Tessar 2.8cm f8. Bother versions are uncoupled from the rangefinder of the camera. For use on a Contax film camera you will require to have the external distance meter.

The earlier versions has the classic all black finish (with chrome or nickel parts). It was manufactured for the Contax I camera. This version is rarer.

If you have a copy of the black version and could share images, please get in touch!

The most commonly available version of Carl Zeiss Jena Tessar 28mm f8 is the silver version. This version was manufactured for the Contax II and III.