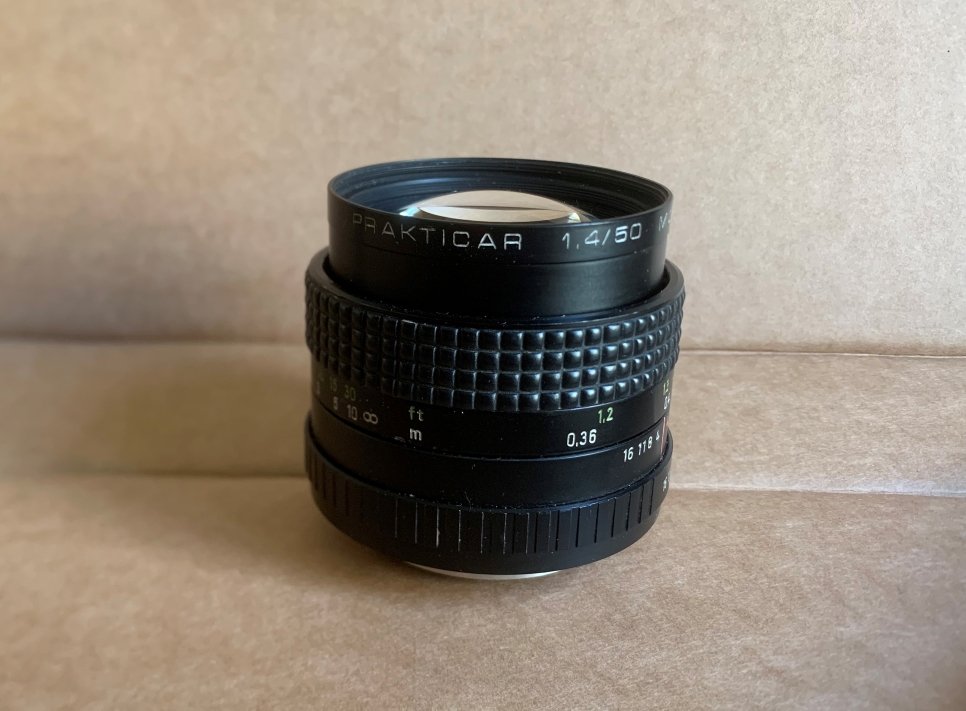 If you like East German Zeiss glass and want a fast 50mm lens you really do not have that many options. Either you go bunkers on a Carl Zeiss Jena Pancolar 55 1.4 – that is if you can find and afford one, or you relinquish and continue using a 1.8 50mm lens like the Pancolar. Is there really no other option? Rest assured, there is: the Prakticar-B 50mm 1.4 comes to the rescue. Available at a reasonable price and widely available it represents a valid alternative for your 50mm necessities.

The Carl Zeiss Jena Prakticar 50mm 1.4 was part of the last push of the East German optic manufacturers before their finally got wiped out by their competitors. VEB Pentacon (which absorbed Meyer-Optik Görlitz) launched the Prakticar B cameras and the 50mm 1.4 was their flagship fast 50mm lens. Yet the lens itself was not manufactured by VEB Pentacon but by Carl Zeiss Jena – hence the labeling. The Prakticar B cameras all used a Praktica-B Bayonet mount.

It is interesting to note that at that time the East German manufacturers were already on their knees and although they still built good optics, there was a definite cost-saving trend. The Prakticar cameras are rather flimsy feeling due to the average materials used. Gone were the days when East German cameras were heavy-duty, sturdy, solid metal construction. Although a wide range of camera types and lenses were made for the Praktica-B system, nowadays these are not very collectible. Most users and collectors prefer the M42 screwmount lenses of Carl Zeiss Jena and therefore Praktica-B mount lenses tend to be very affordable. Most lenses using the Prakticar-B mount are also not really overwhelming in terms of quality – but there are exceptions and the 50mm 1.4 is one of them.

As mentioned, Prakticar-B lenses are not renowned for their built quality. Most are feeble looking plastic lightweights. Luckily Carl Zeiss Jena was wise enough to built their 50mm 1.4 like a classic, old-school lens using a solid metal lens barrel. They did not want to put their name on something made totally out of plastic. The lens feels well balanced and sturdy, which makes it comfortable to shoot with. Aperture settings are with clicks. The focusing ring is rather wide and has a rubber surface. The front element is wide and exposed – I do highly recommend using a lens shade in sunny situations.

I used the Prakticar 50 1.4 extensively on many trips and various situations. It is a decent all-rounder lens that allows you do to a bit of everything. The area the lens really excels at is in low light situations. Taking pictures with a limited amount of available light is were the Prakticar 50 1.4 shines the most. It manages to capture a fair amount of details and has a good contrast.

The bokeh is pretty good as well, which allows you to take nice pictures with a lovely amount of separation. The colours are rather vivid. In terms of sharpness the Carl Zeiss Jena Prakticar 50mm 1.4 is not bad at all. Although a bit soft wide open it does capture loads of details once you stop it down a bit.

One aspect I particularly like about the Carl Zeiss Jena Prakticar 50mm 1.4 is that it has a pretty short minimum focusing distance of 36cm, which allows you to get really close and personal with your subject.

Due to the use of thorium, the glass tends to have a yellow tint. This is not an issue has you can either adjust your white balance or clean up everything in post. Personally I do not mind this slight yellowish colour grading and I never adjust anything – it gives the pictures an almost film look.

Overall the Carl Zeiss Jena Prakticar 50mm 1.4 is a very capable lens that offers loads of value for money. There are other 50mm 1.4 lenses in the same price range that will be sharper wide open, like for example an Olympus 50mm 1.4 and others will have a wilder bookeh, but the Prakticar 50mm 1.4 does a lot of everything very well too. I believe that people who like to experiment with light, flares and colours will love using this lens.

The thing that annoys me the most about the Carl Zeiss Jena Prakticar 50mm 1.4 is the lack of consistency. Sometimes the Prakticar-B manages to capture amazing images. Strong contrast, crisp details, a beautiful bokeh. And then two shots later it is completely the opposite. Consistency is what makes or breaks a lens for me. I want to have an idea of the end product when I shoot and although I used this lens extensively it still is a bit of a mystery for me.

Granted, the super consistent lenses like the Summicrons of this world are normally in a different price range than the Prakticar 50mm 1.4, but you also have cheaper alternatives, take the Nikon 50mm f2 for example.

Shooting at f1.4 is the main reason most people will buy this lens. Unfortunately, wide-open, the Carl Zeiss Jena Prakticar 50mm is not a world beater. It’s not that it is horrible either, it is just that there are loads of alternatives that perform at 1.4. The is a lack of details, some smudgy lack of contrast that I find is a bit irritating.

I used this lens extensively in many situations but I never felt comfortable using it wide open when the shot really matters. F4 was the aperture of choice on this one, where results were neat and you still had a nice amount of separation.

Finally, the Carl Zeiss Jena Prakticar 50mm does have issues with flaring. the front element is rather wide and exposed. There are a lot of situations where you think that you everything under control, you think you know where the light sources are when you take the shot, but then flaring still pops up on the image. I recommend using a lens shade. On the other hand some people might love the lens for it, for those who like to have more artistic shots.

There really is only one version of this lens that I am aware off. Comes in a a black finish with rubber focusing ring. All lenses have a Prakticar-B mount. All lenses are multi-coated. Earlier versions were manufactured using thorium, which can the glass elements to have a yellow tint.