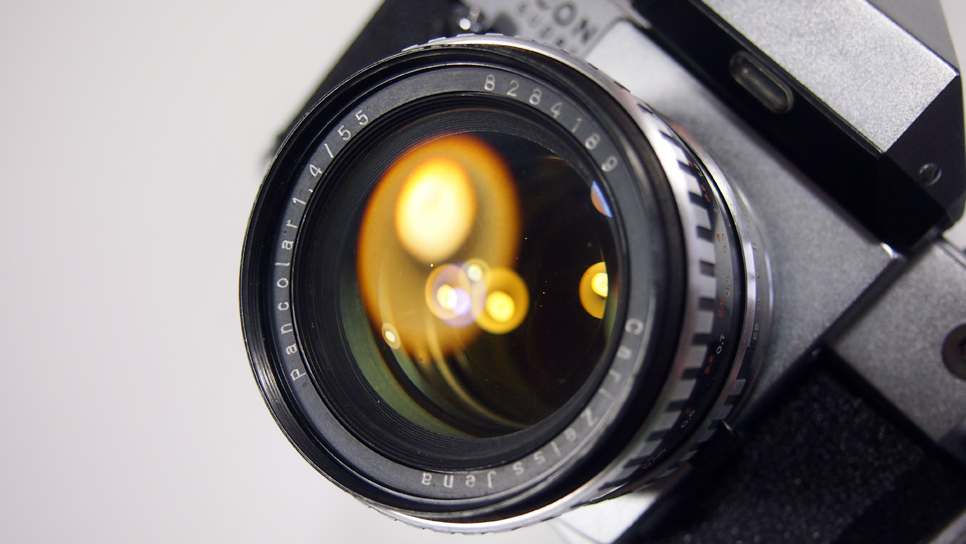 The Carl Zeiss Jena Pancolar 1.4 55 is a true legend among lenses. Around 5 000 copies were manufactured exclusively for the Pentacon Super SLR (not to be confused with the Pentacon Super TL). As the name suggests, the Pentacon Super was supposed to be the best SLR on the market, targetted specifically towards high end users and professionals. Obviously, such a camera could not be delivered with a normal Pancolar 1.8 50mm lens – something truely special had to be build! That’s why the Pancolar 1.4 55mm was created. Not only is the focal length of 55mm unusual, the Pancolar 1.4 is also a faster (and slightly bigger) lens than its’ cheaper counterpart.

At first, I was very sceptical about this lens. I heard about it a few times but I always thaugth that it was an overpriced collector’s toy that was hard to find and certainly overrated. By pure luck, I had the opportunity to buy a copy (with the matching Pentacon Super camera) from the son of a person that used to work at the Carl Zeiss factory in Jena. He told me that his father treated the lens like a baby and no one was allowed to touch it. The lens was really in incredibly good condition and I put my savings together to get it – and have never regretted it since. The Carl Zeiss Jena Pancolar 1.4 55 won me over. It really is an outstanding lens and I love using it.

Yes, the bokeh is great and the colours are cracking but what really amazed (and still amazes) me the most, is the fact that you can shoot this lens at f1.4 and you still get razorsharp images, if you set the focusing correctly. In my opinion, most super fast lenses always lacked sharpness when shot wide open – not the Pancolar at f1.4.

All Carl Zeiss Jena Pancolar 1.4 55 have a M42 mount. All lenses come with the typical black-silver “Zebra” look. One thing you need to now about Zebra lenses is that they are radioactive (I kid you not!). Zeiss engineers experimented with using different elements to enhance the sharpness of the lens. Pancolar lenses were produced with Thorium, which is a naturally occurring radioactive chemical element. Don’t worry, thorium is not dangerous.

Yes, it is not cheap and you are right to expect something special from that vintage glass marvel. Rest assured, the Carl Zeiss Jena Pancolar 1.4 55 will also deliver.

The bokeh is just minblowingly good – a creamy, dreamy, well balanced marvellous round twirl that never seems harsh or annoying. On top of that, the Carl Zeiss Jena Pancolar 1.4 55 will also be super sharp if you want it to – without requiring you to stop it down, wide open at f1.4. That in itself is already quiet something as most lenses are either good at one or the other but rarely at both.

The unusual focal length of 55mm might not sound amazing but it actually comes in very handy for portraits. The extra luminosity of the lens is also useful for available light photography. The Carl Zeiss Jena Pancolar 1.4 55 excels both at portraiture and landscape photography – it really is a killer package.

The ridiculous price tag and limited availability aside, the main negative aspect of the lens is the yellow tint of the glass (due to the Thorium). Personally, I do not really care about it as I like the warm colours it produces (every shot looks like it has been taken during a sunset) but if you want perfect colour rendition you either need to set your white balance accordingly or put some extra effort into your darkroom / lightroom development. You can also get rid of the yellowish tint by exposing the lens to UV rays (i.e.: the sun).