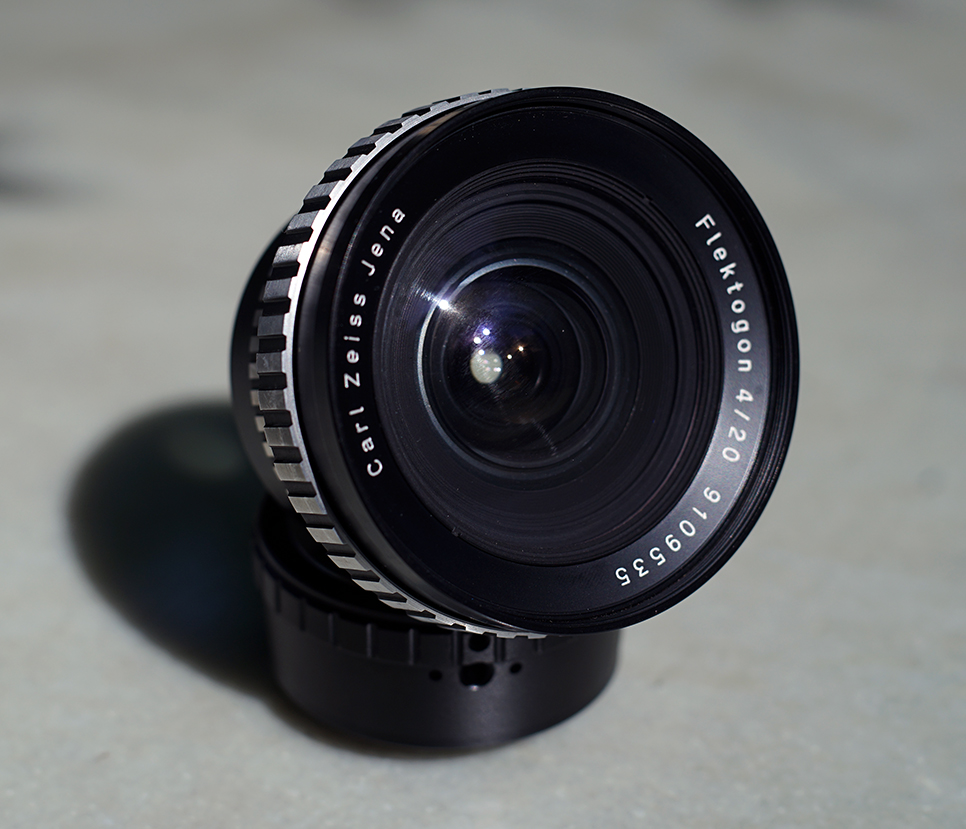 The 20mm Flektogon is still regarded highly for the minimal distortion it produces. It is much appreciated by architecture photographers.

The lens was manufactured in M42 and Exa mount and typically comes with the classic black and silver striped Zebra look.

I am a big fan of wide angle lenses. So I was very excited when I got my hands on a Flektogon 20mm 4. I actually owned the successor, the Flektogon 20mm 2.8 for a long time before so I was looking forward to seeing the evolution between those two Flektogon lenses.

The 20mm 4 Flektogon is famed for the lack of distortion. Architecture and landscape photographers love this lens because lines turn out very straight. I totally agree, the lack of distortion is remarkable – hats of to the engineers at Carl Zeiss Jena for pulling that off. You will not spend time in post production to straighten lines.

Contrast is good and colors are faithful. This Flektogon is also very sharp in the center of the image. The bokeh is also rather interesting and swirly. When you combine these factors and add the lack of sharpness in the corners and the vignetting you can take rather unusual looking pictures which look almost as if you are shooting through an old looking glass. Obviously this is not to everyone’s taste but if you are on the experimental side you will have a lot of fun with the old Carl Zeiss Jena Flektogon.

Another remarkable feature is the minimum focusing distance of 16 cm, which really allows you to get very close to your subject.

This lens is often criticized for its ergonomics. It does feel a bit clumsy due to its large front element but I cannot agree that the ergonomics are not good. Everything is where it should and the lens feels well balanced and rather compact compared to a lot of other super wide angle lenses.

Two major drawbacks (that most super wide angle lenses will have to a certain extent) is vignetting and softness in the corner. Unfortunately the Flektogon 20mm 4 has some major issues here to the point that it can be distracting. The sharpness in the corners is much worse than in the center in the image. In many situations the image does not look harmonious. This even happens when you do not shoot the lens wide open – so it is rather difficult to control it.

On top of the lack of sharpness in the corners, the lens also generates a lot of vignetting. Corners turn out noticeably darker than they should be. This will not be noticeable in all situations but when you are shooting outdoors for example it becomes very apparent. Again, this creates a very specific and distinctive look that not everybody will be keen on. The successor, the Flektogon 20mm 2.8 behaves much better in this regard, especially in terms of vignetting. If you want a more neutral and “modern” look, the 20mm 2.8 Flektogon might be a better option.

Chromatic aberration is also a slight issue of this lens. Bright lights and reflections are not a favorite of this 20mm lens. All in all, although the 20mm 4 Flektogon is a good lens that has some positives if you are keen on having corner-to-corner sharpness, look elsewhere. On the other hand if you like your images to have a distinctive vintage look and are not that fuzzed about vignetting give this Flektogon a shot.

The Flektogon 20mm 4 is essentially available with two different finishes: the more common zebra styling and the rare all black version.

This is by far the most common version of the 20mm f4 Flektogon. The Zebra version has the typical silver stripes that were very common among Zeiss lenses during that time.

The second version looks very different as it is all black. This version resembles the successor to the 20mm 4 Flektogon: the Carl Zeiss Flektogon 2.8 20mm. This version is much less common. The lens formula was not changed.