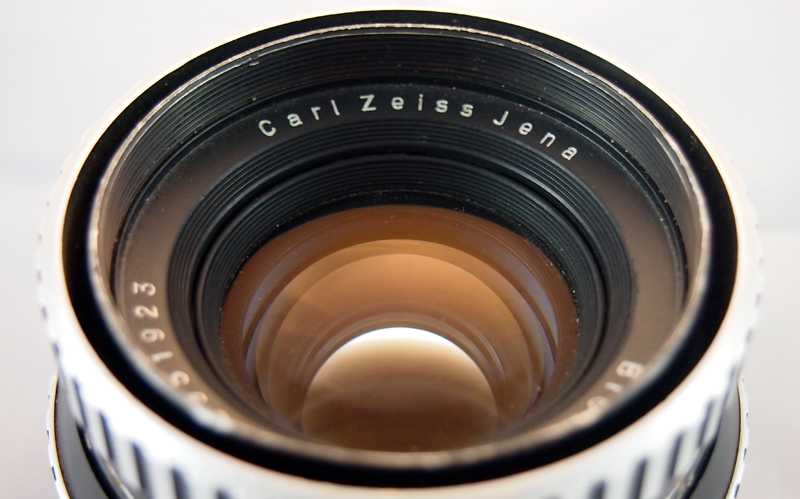 Different versions of the Carl Zeiss Jena Biometar 2.8 80 exist. The first version has an all silver finish with a leathered focusing, ring later models have the typical Zebra stripes while the latest models have an all black finish and are Multi Coated when marked as MC.

This version has a leather focusing ring. The lens is single coated.

The Zebra version is the most common Biometar type. It is called Zebra due to the typical black and white stripes. The lens is single coated.

The late all bacl version is the most modern Biometar around and was produced until the lens was discontinued. The black versio  is normally multi coated (MC).

The Carl Zeiss Jena Biometar 2.8 80 is probably one of the most affordable Carl Zeiss Jena vintage prime lenses you can go for. A nice lens will only set you back around $100 (multi coated lenses tend to be a bit more expensive) – which is a bargain for this lens.

The lens offers many things most vintage glass users are after. Images have a distinctive look and feel. The contrast is very good, as is the bokeh – making it an ideal portraiture lens. When shot wide open the lens is remarkably sharp. The minimum focusing distance of 1 meter is also decent. Unlike most other medium format lenses the Carl Zeiss Jena Biometar 2.8 80  is also remarkably compact and light, which is a blessing as most adapters tend be quiet large.

Keeping the modest price tag in mind the Carl Zeiss Jena Biometar 2.8 80 is really offering a nice overall package. The only major drawback is that it strugles with flares at times. This is obviously especially true for non multi coated lenses.

Another slight drawback is the useability of the lens. The diameter of the lens is large, the focusing right is situated at the end of the lens barrel. The lens was simply designed to be used on a medium format waist-level camera and you do kind of sense this when shooting on a “normal” camera.