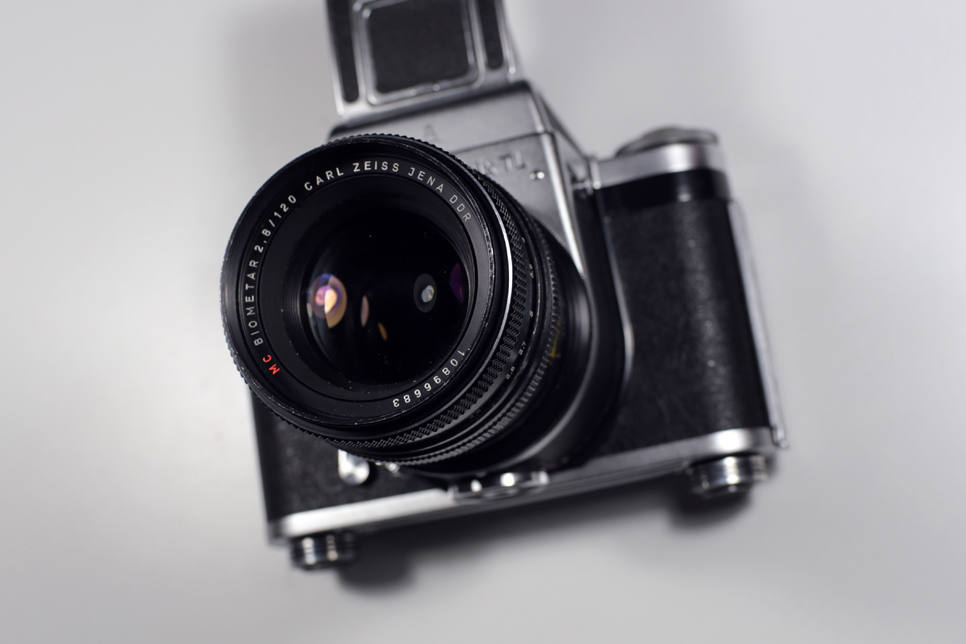 I was very positively surprised by this lens. The 120mm Biometar is really a very good lens and as good as its smaller brother the 80mm Biometar.

It is very solidly built. No plastic here. At over 500 grams it does weight a bit but it is still bearable as it is a tele lens. The ergonomics are very good, as you would expect from a Zeiss lens. The focusing is very smooth and precise. Aperture settings are situated in the middle of the lens lens barrel. You can hear a little click at each aperture setting (this might be a slight disadvantage for videographers). I especially like the different texture of the aperture and the focusing settings, you always know where your fingers are and what you are turning.

What impressed me most about the 120 Biometar is the image quality. Stop that lens down and is it incredibly sharp. Even wide open it will perform very well. The centre is definitely sharper than the edges of the image but as most people will use this lens on a smaller format camera (remember the Biometar is a medium-format lens), this does not really matter.

The tones are warm, as you would expect from a Carl Zeiss Jean lens. The bokeh is good and a bit more subtle as it does not twirl in all directions. The bokeh of the 120 Biometar mainly tries to be a backdrop to your subject without distracting- and it does that very well in a very balanced way.  The contrast is also really good. This package makes it an optimal portraiture lens.

Besides portraiture the Biometar can also be used as a general purpose short tele lens. This lens will work best on larger format cameras.

The main disadvantage of using Pentacon Six lenses on digital cameras is definitely the adapter as these tend to be large. This means that with the adapter attached the lens length will nearly double. Most adapters are nearly 4cm long. That does not seem much but in the real world it will take up some extra space in your camera bag. On top of that the lens is on the heavy side – half a kilo is not nothing when you run around all day.

The 120 Biometar is also a bit flare prone – I would highly recommend using a lens shade in order to obtain best results.

The 120mm 2.8 Biometar exists with two different finishes. The earlier model has the typical ‘Zebra’ finish with black and silver stripes. The Zebra version tends to be a bit more affordable due to the inferior lens coating.

The later model comes with an all black finish. It often has the engravings MC, which means that the lens is Multi Coated. These lenses tend to be more expensive and are a bit better when it comes to handling lens flare.

Transforming the Biometar 120mm into a tilt-shift lens

The advancement of adapter technology means that now you can trasnform the Carl Zeiss Biometar 120 into a tilt-shift lens. I had the pleasure to try the Fotodiox Tilt Rokr lens adapter.

These tilt-shift adapters allow you to tilt, rotate and shift the lens. Normally this is used in architecture photography, to eliminate distortion and have straight lines. It also allows you to create really cool effects.

Medium format lenses like the Pentacon Six Biometar 120mm lens are very well suited to be used on a smaller sensor digital camera with a tilt-shift adapter because of the crop factor. As the smaller only captures the center of the image, you will not have to deal with the vignetting and softness of the image corners. This is particularly useful when you tilt, shift and rotate the lens. By the way, the effect is maximized the longer the and faster your lens is. So a (short) tele lens is perfect to create some pretty amazing images straight in the camera. Another pro tip is to try to shoot from a high vantage point. You want to be high up or have the horizon as far as possible in the distance.

These tilt-rokr adaptors are really fun to use and do come in handy. Obviously you can use them as standard adapters without tilting and shifting anything. But when you feel the urge you can start experimenting. Although these adapters are not cheap I still do recommend the extra investment. These adapters are very solidly made and super versatile. It will allow you to experiment and expand your photography.