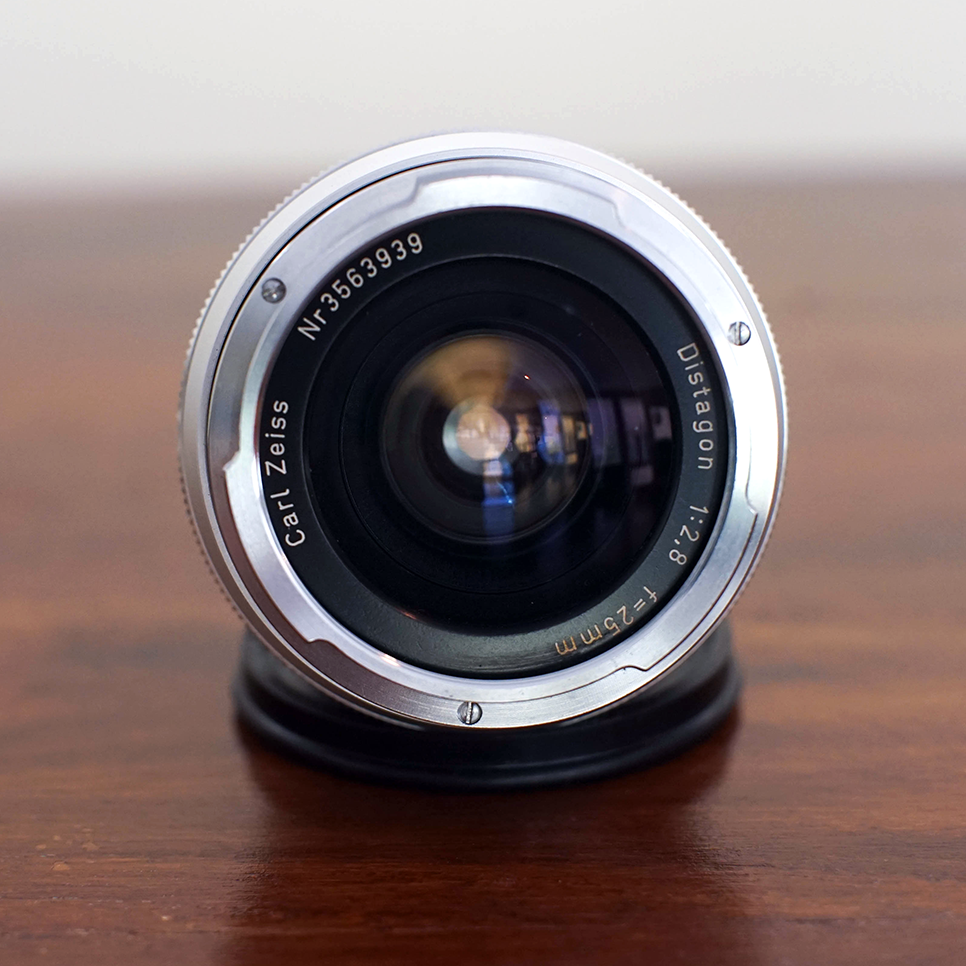 The Carl Zeiss Distagon 25 is a highly sought after wide angle lens. The distagon lenses are retrofocus lenses that are renowned for their remarkably short minimum focusing distance, sharpness and minimum distortion. The Distagon 25 was initially introduced in 1961 for the Carl Zeiss Contarex SLR system. The lens is still being produced nowadays although it has been altered significantly throughout the last decades. In the fast paced, consumer oriented photography world, having a lens being produced for over half a century is a true sign of quality.

*Disclaimer: I am reviewing the first Contarex Silver version (all samples images were also taken with this lens). I personally have not used the other lenses.

For those of you who have never had the pleasure to use Contarex lenses: in terms of built quality this is as good as is gets. Everything in the Contarex lineup is superbly built and the Distagon 25 is no exception. The lens feels very solid and beautifully made. There is no plastic here: only glass and metal. Focusing is super smooth and the ergonomics are perfectly balanced. The focusing ring is nicely riffled. This is craftsmanship of the highest quality. Although over 50 years old, the lens has not aged a bit. The lens looks stunning.

Besides the outstanding ergonomics, the Distagon 25 is also a joy to use. It delivers a ton in terms of optical performance. This lens is easily one of the sharpest super wide angle lenses I have used. Images come packed with loads of details. The corner to corner sharpness is very good for such an old wide angle lens. Some slight falloffs occurs in the extreme edges but I don’t find it distracting at all. It won’t be visible in a lot of situation and if it does it will add some character to your picture.

As usually the case with Carl Zeiss lenses, the contrast is very balanced. It handles most lighting situations perfectly. Both bright and dark tones look good and rich in detail. At f2.8, the Distagon is also well suited for available light photography and has a pleasing Bokeh.

It is pretty remarkable how much detail the lens captured wide open. A lot of super wide angle lenses of that time are really struggling when not stopped down. They normally tend to become soft, even in the center of the image. The Distagon 25 takes this hurdle easily and delivers timeless images oozing with sharpness. When you add the super short minimum focusing distance into the mix you end up with a super fun lens to use. The Distagon will push you to get close and personal with your subject.

If you prefer to take your distance the Carl Zeiss Distagon 25 will not disappoint you neither. Although not the lightest lens in the world it still is a great travel companion. It makes up for the extra weight by being very versatile. Landscape and street photographers will love it for its very balanced images. You will be rewarded with vibrant, clear images.Distortion is minimal and the sharpness is good across the board.

The Distagon does not have any major flaws and can be used to a lot of different situations. It’s a steep price for a vintage lens but if you take good care of your gear this one is a keeper.

Here comes the bad news: this beautiful lens is expensive! A mint version will easily set you back around $1 000 USD. Unfortunately both collectors and photographers like the old Contarex lenses. As the availability of these old Carl Zeiss gems is rather limited the price is naturally pretty high.

Another disadvantage is the weight of the lens. The high quality materials used make it pretty heavy. The Contarex camera for which the lens was initially intended for is a very heavy camera, hence the lenses had to be also somewhat solid to achieve good balance. When used on modern “lighter” cameras, you do notice that the balance is not ideal.

The Distagon is normally rather flare resistant but the front lens element is rather exposed and in some rare occasion it can happen that flaring occurs. I would recommend using the lens shade.

There is a slight falloff in the extreme corner of images but nothing to really worry about.

Finally, if you plan to use any Contarex lens on a digital camera: the original Contarex cameras add a thumb-wheel that controlled the aperture. It is like a tiny wheel that was placed close to the shutter release button. The photographer could change the aperture while looking through the viewfinder. The aperture number was displayed in the viewfinder (Carl Zeiss used a similar system for their iconic Contax cameras – but there the ingenious wheel controlled the focusing). Controlling the aperture with the camera means that the lenses of the Contarex line do not have aperture settings. The only setting that you can directly control on the lens is the focusing. The whole lens barrel is basically the focusing ring – nothing comes in your way. This more complex mounting and aperture mechanism requires you to set the aperture on the adapter. Contarex adapters therefore tend to be more costly (this is the same with Nikon F adapters). I highly recommend using a brand-name adapter (Novoflex is a good bet).

Although pricey, I still do recommend it (especially if you find an affordable Contarex version as these will most likely even gain some value over time). All in all this is a top notch lens. If you want an alternative Zeiss lens while paying significantly less, I would recommend the 20mm 2.8 Carl Zeiss Flektogon. The 20mm Flektogon is not as sharp, has more distortion and more vignetting but is similar in terms of minimum focusing distance and contrast. It also costs about half the price of the Distagon.

The first version of the Distagon for 35mm was introduced for the formidable Contarex SLR system. In my humble opinion the Contarex lineup is one of the best camera system ever made. It does not often get credit because it wasn’t that successful in terms of sales figures – but few systems get close to Contarex when it comes to craftsmanship, built quality and optical performance. The Contarex system offers a wide range of high-end focal lengths. The Distagon 25 is the big brother of the Distagon 35 f4 which was introduced in 1957. The total production of Distagon 25 lenses with Contarex mount is 6633 units. They are extremely sought after and the used price for a mint lens can easily set you back around US$1 000.

The second version of the Distagon 25 for Contarex has an all black finish to match the finish of the “Contarex Super” camera which was introduced in 1967. Besides the different look, the optics and technical aspects of this version are identical the the previous Contarex version. If you are able to share images of the second version, please get in touch.

The Carl Zeiss Distagon was also manufacrured for Rollei QB mount cameras between 1970 and 1991. The first generation of the QBM version was manufactured in West Germany by Voigtländer, before the lens production moved completely to Japan and Singapore. Only the later Rollei branded versions with rubberized rings were produced in Singapore. Lenses manufactured before 1974 are T coated, afterwards they have HFT coating. Carl Zeiss purists will argue that both Rollei QBM version and Contax C/Y version are not the real deal as they were mostly produced under license / in a joint venture in Asia. Collectors tend to not purchase them – hence these versions are available at approximately a third of the price of a Contarex version making them a good “bargain” purchase. You might not quiet get the character and built quality of the Contarex mount version but you will obtain a highly respectable fast wide angle coated lens with minimum distortion and good sharpness.

The Distagon 25 2.8 was also manufactured with Contax c/y mount. The Contax C/Y is the most easily available version and not as collectible. Hence the Contax c/y  version tends to be much more affordable at around 300US$ second hand.

If you have pictures of this lens that you could share for the website – please get in touch.

Carl Zeiss actually still manufactures the Distagon 25. The modern version is manufactured for most modern camera systems such as Canon and Nikon. It has improved coating and is available in F2.8 and F2.